The Young and the Restless returns on Friday with an all-new episode as Adam’s (Justin Hartley) kidnapping from his Newman Towers hallway will be addressed. 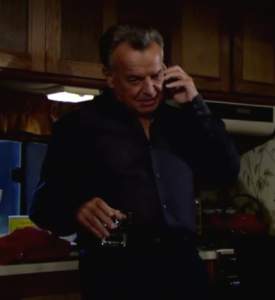 Ian may be back on Friday’s Y&R to seek revenge on Adam for the Paragon situation. (CBS Screenshot)

In the past month, Adam — who’s obligated to follow Victor’s (Eric Braeden) has been quite active at forming alliances. First, he made a pact with Victor as they recruited Noah (Robert Adamson) to separate Newman Enterprises from the Santoris. After receiving word that the Feds were tipped off about the Santoris’ illegal activities, Victor wanted out of their business deal.

However, Luca (Miles Gaston Villanueva) balked at this, saying his father wouldn’t let that happen. A short while later, Adam formed a pact with Luca, convincing him that they could take all the power by dethrone their fathers.

Judging by recent events, Adam’s been acting as a double agent for Victor all along. On Tuesday, at Victor’s request, Adam attempted to go to Spain, only to be kidnapped and taken inside his elevator.

According to Celeb Dirty Laundry, Adam’s abduction “may be tied to the return of a villain on the Genoa City scene.”

The site speculates that Ian Ward (Ray Wise) is the likely kidnapper, as he dealt with complications via partnering up with Adam during the Paragon ordeal. While Ian was arrested without a hitch, he could’ve been out meandering inside Newman Towers; especially since he used to live in the penthouse that Sage (Kelly Sullivan) takes up residence at. However, the villain could also be Marco Annicelli (Peter Bergmen), who’s supposedly dead.

Adam’s Abduction Could Be a Setup by Victor 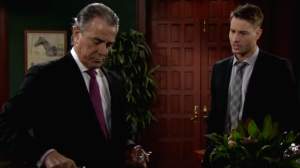 Pictured left to right, Victor and Adam, as Victor may have a plan that runs deeper than Adam’s. (CBS Screenshot)

Another scenario would be that Victor arranged the kidnapping in order to pay back Adam for his deceptions. For this to occur, he’d have to find out that Adam and Luca’s plan is legit. If the two are moving forward with destroying their fathers, this would be a strong enough motive for Victor to act on. Adam getting nabbed en route to Spain could be a cover-up for his revenge plan.

At this point, Y&R writers have done a clever job at keeping Adam’s true loyalties unclear. Once the kidnapping fiasco unfolds, fans should get a clearer picture of what his intentions really are.