The Young and the Restless returned on Friday with an all-new episode as Billy (Jason Thompson) spoke to Victoria (Amelia Heinle) and a wrench was thrown in Kevin’s (Greg Rikaart) plan when Natalie (Mara McCaffrey) showed up with upsetting info.

Read on for Y&R’s Friday, January 15, 2016 spoilers. Be sure to check back after the show for a complete recap. 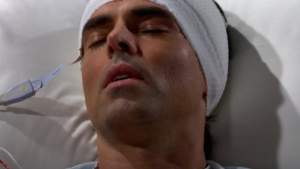 Billy — shown in Friday’s Y&R episode — speaks for the very first time since he was critically injured. (CBS Screenshot)

Billy has always had a penchant for high risk. However, this time, he bit off more than he could chew. After failing to pay up the money he owed on a horse racing bet — one he made to buy into Kevin’s cyber project — he was physically assaulted by Gill the bookie and his henchmen. Later, Noah (Robert Adamson) accidentally backed over him.

Once Marisa (Sofia Pernas) located him, he was sent to the hospital. Billy soon received surgery to relieve pressure on his brain, which wasn’t effective. With seemingly no other options, the Abbotts — led by Jack (Peter Bergman) — took him off his machines. A short while later, he showed signs of brain activity.

On Friday, Dr. Shelby (Terrell Tilford) informs Paul (Doug Davidson) and Dylan (Steve Burton) that he isn’t sure when Billy will wake.

However, Billy shows further signs of recovering when he speaks. With a wire running into his bandaged head in his hospital bed, he recognizes Victoria.

Later, Victoria begs Billy to wake up again. Dylan and Paul want to question him on what transpired. Victoria insists he’s not ready; he’s needs further recovery. Dr. Shelby says that he needs rest. She tells Paul that Billy was okay before him and Dylan walked in. Paul says he’ll return when Billy’s stronger.

Victoria tells Billy — who’s back asleep again — a story about a frog and a Prince. She wants him to come back again “like a foolish frog” so they can have their happy ending together. 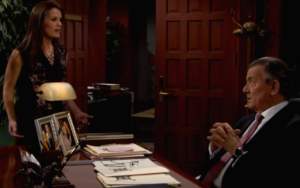 Pictured left to right, Chelsea and Victor, as she demands to know where Adam has gone. (CBS Screenshot)

Adam’s (Justin Hartley) motives have become quite complex. Initially, he made a pact with Victor (Eric Braeden) — which involved the recruitment of Noah — to take down the Santoris. However, he later made a deal with Luca (Miles Gaston Villanueva) to take all the power by dethroning their fathers. Early this week, Y&R fans found out that Adam’s supposedly a double agent and has been working with Victor all along.

At Victor’s request to go to Spain for some business, Adam was kidnapped right from his Newman Towers hallway. There’s been speculation as to whether Victor himself is behind it, or Ian Ward (Ray Wise) has returned for Paragon payback.

Chelsea (Melissa Claire Egan) hasn’t had the easiest time dealing with Victor’s stronghold over Adam. Nonetheless, she told him that she’d like another baby, which he seemed less than thrilled about.

On Friday, Chelsea tells Victor that she doesn’t think Adam would up and leave her, or Connor (Michael and Nolan Webb). Chelsea — who’s continued to fight for her relationship —confronts Victor about Adam’s whereabouts.

“Where the hell is my husband?”

Victor says that he doesn’t know where Adam is.

Later, Luca informs Marisa that he’ll find another plan of attack since Marco’s (Peter Bergman) supposedly dead. He’ll do what it takes to get what’s his. Marisa asks him to stay in bed longer; they kiss. Later, he promises he won’t give up the info he has on Noah, which is why he needs her to trust him.

Victor asks Luca on why he’s double-crossing him. Luca insists he isn’t. Victor tells him that he thinks that the Santoris grabbed Adam on a power play. Luca disagrees; Victor warns Luca not to disrespect him.

Later, Chelsea asks Marisa what part of Spain Luca’s family is from. Marisa wants to know why she would ask that. Chelsea informs her that Adam’s missing. Marisa thinks Chelsea’s better off letting Victor deal with Adam’s disappearance. Claire accuses Luca of working with his father and against Adam.

Paul — telling Dylan he’s good at investigating — invites him to become a member of the police. He thinks he earned it. After hesitating, Dylan accepts. Later, Chelsea reports Adam’s disappearance to them.

Meanwhile, Victor receives an email saying he’ll get his son back once he gives up the girl.

Natalie Took On Her Own Cyber Project Investors 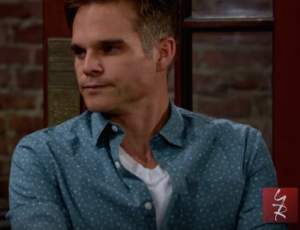 Kevin — pictured in Friday’s Y&R episode — expresses his concerns to Mariah about his decision to take on Victor. (CBS Screenshot)

Despite all that’s gone on with Billy, Kevin has continued pursuing the means necessary to launch his cyber project. Prior to his life-threatening injuries, Kevin was going to take Billy on as an investor. However, Victor got wind of the project and instantly wanted in. Jack eventually came forward, wanting to invest on Billy’s behalf. After hesitating, Kevin decided to go with Victor.

“Billy didn’t die when they took him off life support.”

Right away, Mariah sees how this could reignite a war between Genoa City’s two prestigious families.

“We are about to be a stomping ground of crap between the Abbotts and the Newmans.”

However, Natalie shows up, saying that she made a deal with her own investors on the cyber project.

Mariah is pissed that Natalie screwed them. Natalie says that her investors may of hacked into her computer to find out info on Victor, Kevin and Mariah. Natalie — scared for her safety— also admits that the program doesn’t work like she thought it would.

Kevin insists that they keep Natalie protected. He has her stay at his place. Natalie agrees to work on fixing the cyber program. Mariah tells Kevin that she doesn’t like her. Kevin — worried that Victor will get word of the situation — insists that Mariah go along with the plan because the award will be huge.