The Young and the Restless returned this week with all-new episodes as Adam (Justin Hartley) is back to Genoa City from being kidnapped and Noah (Robert Adamson) will becurious about what Luca (Miles Gaston Villanueva) is up to with Victor (Eric Braeden). Meanwhile, the person that kidnapped Adam is somebody that’s least expected.

Phyllis Is Hell-Bent on Taking Down Victor 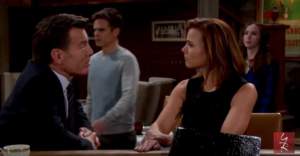 Pictured left to right, Jack and Phyllis, as Phyllis’s hate for Victor may have reached another level.

The complexity of Adam’s alliances finally caught up to him when he was kidnapped from Newman Towers. While the events related to the kidnapping were primarily associated with Natalie’s (Mara McCaffrey) cyber project, Victor — whom he’s working as a double agent for — had sent him to Spain for some Newman business.

In the process of helping Victor take down the Santori family, Adam voluntarily approached Luca about forming a pact to dethrone both of their fathers. Luca wanted to get in touch with Marco (Peter Bergman) while Adam said it wasn’t a good idea.

On Monday, Adam’s kidnapper says it’s time to get him cleaned up; it’s almost showtime. Meanwhile, Kevin’s (Greg Rikaart) concerned about Natalie’s safety. Paul insists everything’s going to be fine. At Newman Towers, Natalie’s nervous about being offered up as bait.

Summer (Hunter King) and Abby think they should be involved with the Chelsea 2.0 fashion show. Marisa (Sofia Pernas) informs Chelsea (Melissa Claire Egan) that she had been abducted by Victor to trade for Adam. She wants to help. Chelsea informs them all of the kidnapping switch.

Paul (Doug Davidson) doesn’t want Kevin anywhere near Newman Towers for the exchange. He dresses Natalie up as a wedding bride for the exchange. The exchange is made as Natalie fights back against the kidnapper, buying her enough time for Dylan to take her down. Adam reunites with Chelsea; they kiss. Later, Natalie disappears and leaves her tracker bracelet — given to her before the trade-off — behind. Adam informs Victor that her kidnapper’s a woman.

Meanwhile, Sage (Kelly Sullivan) and Nick (Joshua Morrow) seem to be on the exact same page. She informs him that — while searching her hospital records — she couldn’t find nothing on Dr. Anderson’s (Elizabeth Bogush) maiden name. Nick devises a plan with Sage to fool her. Meanwhile, Sharon (Sharon Case) says she’s not going to let Dylan (Steve Burton) leave, although he says he’ll be late. Dr. Anderson warns Sharon to keep Sage away from Sully. Later, Sharon tells Sage that she doesn’t want her going near the kids. She says she spoke to Dr. Anderson.

Nick — playing along to deceive Dr. Anderson — tells her that he wishes he’d open his eyes to Sage’s ways a lot earlier. Dr. Anderson says he needs to have Sage committed.

Meanwhile, Phyllis (Gina Tognoni) stops Natalie from vanishing. She’s seemingly the woman kidnapper.
Later this week, Noah is aware that Luca is up to no good against Victor and wants to know what he’s doing. Adam tries to protect Noah from Luca’s intentions, which frustrates Luca, causing friction between the two. Phyllis tells Billy (Jason Thompson) that she’s taking down Victor and he wants in on it. He’ll still play it cool with Victoria (Amelia Heinle) to stay on her good side. Meanwhile, Natalie informs Kevin (Greg Rikaart) and Mariah (Camryn Grimes) about a new deal made.

Abby Gets Jealous That Max Takes a Liking to Dr. Neville & Ashley 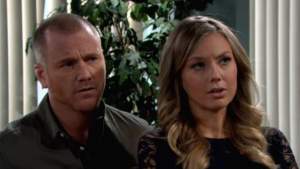 From left to right, Stitch and Abby, as Abby starts to question whether being a step mother is in the cards for her. (CBS Screenshot)

Jack (Peter Bergman) relationship with Billy hasn’t exactly been a strong one, as Billy’s personal troubles drove the two further and further apart. However, since the assault and accident that nearly killed Billy, Jack has started seeing his brother in a different light. He even reconsidered his stance against lending Billy the money to get it on Kevin’s cyber project. Now that Billy is awake and coherent, the two have been getting along quite well. Unfortunately, the same can’t be said for Abby (Melissa Ordway) and her stepson Max (Jared Breeze).

Later in the week, Jack puts himself at risk by telling Billy something important. Meanwhile, Abby continues questioning the strength of her and Stitch’s (Sean Carrington) love, especially because of the trouble she’s having connecting with Max.

At Jabot Labs, Max spends time with Dr. Neville (Michael E. Knight) and the two get along really well. Ashley (Eileen Davidson) is present and Max ends up liking her; something that bothers Abby.