The Young and the Restless returns on Friday with a shocking turn of events, as Victor’s (Eric Braeden) level of knowledge on Adam’s (Justin Hartley) plot with Luca (Miles Gaston Villanueva) is revealed.

Read on for Y&R’s Friday, January 8, 2016 recap and click on “Next Page” at the bottom for info on Billy’s health and Kevin’s cyber project :

Adam Is Acting As a Double Agent for Victor 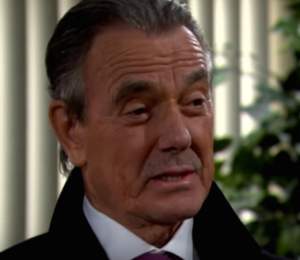 In Friday’s Y&R episode, Victor appears to be privy to Adam’s pact with Luca. (CBS Screenshot)

Everything seemed to be going smoothly between Victor and the Santoris; that was up until Noah (Robert Adamson) took his personal hate for Luca to the Feds. At that point, the relationship between the Santoris and Newman Enterprises was irreparably done as far as Victor was concerned. When Victor made it clear he didn’t want to do any further business, Luca refused to end the relationship.

A short while later, Adam approached Luca about a plot to dethrone their fathers for power; the latter agreed to it.

In Friday’s episode, Noah — with Luca and Adam in the background — expresses his concerns over Billy’s chances at survival. Adam — noticing that Luca is eavesdropping on them — tells Luca he shouldn’t be concerned with them. Later, Luca asks Adam for help locating Marco Anticelli.

Noah tells Victor — in front of Marisa (Sofia Pernas) — that he’ll keep quiet for now, but if Billy dies he may have to come forward about being the driver. Once again, Victor warns Noah not to do it. Later, Victor walks in on Adam and Luca inside his office. He says that they shouldn’t be in there. Once Luca steps outside, Adam asks Victor where Marco is. Victor tells Adam that he’ll give him the info on Marco that he needs; this is enough to stop Luca from listening in on their conversation from outside the door.

At dinner, Marisa informs Luca that she’s excited to work with Chelsea (Melissa Claire Egan) and to be there with her husband. Luca changes the subject; asking her if she gets a bonus for assisting in covering up a vehicular assault. Luca threatens to tell the police. Marisa says he can say goodbye to his father’s company and their relationship if he turns in Noah.

Victor later asks Adam if he’s sure that Luca is in the dark on their plan. Adam says he is, but only because that they do a good job of hating each other. Victor says “that peacock” will go up in flames” once this double agent plan goes through. 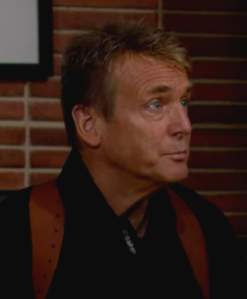 The search for the driver that ran over Billy intensifies, as Paul (Doug Davidson) continues the investigation. On Thursday, Paul and Dylan (Steve McAvoy) came to the conclusion that the driver didn’t necessarily have to be related to the gambling incident.

On Friday, Dylan and Paul wonder whether the driver covered up the evidence. Paul thinks that the driver may not have noticed what he or she did. He’ll then suggest that Abby (Melissa Ordway) and Stitch (Sean Carrington) could’ve been involved. However, they hit a snag upon realizing that the newly weds were in a limo.

Meanwhile, Abby and Stitch continue looking for Max at the athletic club. Max — who’s mother Jenna (Stephanie Lemelin) was recently killed in an auto accident — wondered off when Stitch and Abby stepped away to talk about the situation.

On Friday, Stitch contacts Paul to inform him that Max (Jared Breeze) is missing.

At the station, Abby tells Paul that she thinks she’s failed on her first day as a mother. Paul reassure her that she didn’t. He then questions what Max likes and where he could go. Shortly after, Stitch says he thinks it’s his fault; he should’ve fought harder to see his son prior to Jenna’s death.

Later, Paul, Stitch, Dylan and Abby brainstorm as to where Max could be. Paul calls Kevin (Greg Rikaart) at Crimson Lights to inform him about Max. Ironically, Kevin — while on the phone — sees him wandering around there. Stitch tells Abby that he’d like to pick up Max alone despite her insistence that she accompany him.

Abby tells Stitch that Max hates her, and that’s why he don’t want her coming with him. He reassures her that it’s not the case and he loves her. Shortly after, Dylan (Steve Burton) checks on her. She tells him that Ben probably regrets marrying her. Dylan insists that Stitch loves her. She says “what if that’s not enough?” Abby has her doubts about being able to handle raising a child. However, Dylan vouches — from newfound experience — that she’ll learn as she goes. Abby is still uncertain she can pull it off.

Meanwhile, Kevin — to keep Max’s spirit up — asks him to help him for help beating the zombies in his video game. Max is surprised Kevin would have such a hard time on level three; he later gets excited for defeating them.

Stitch asks Max why he took off. Max says he wants his mother and would rather not live with Stitch. Stitch says he’s been through the same thing too. He tells Max that Abby and himself are his family and they love him; all he needs is a chance from Max.