The Young and the Restless returned on Friday with an all-new episode as Adam (Justin Hartley) tried convincing Chelsea (Melissa Claire Egan) that his situation with Victor (Eric Braeden) is different now while Jack (Peter Bergman) attempted to get Ashley (Eileen Davidson) to come back to Jabot Cosmetics.

Chelsea Realized That Adam Is Being Blackmailed by Victor 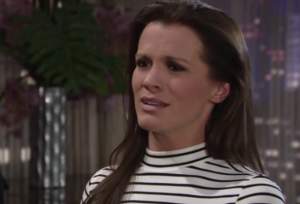 In Friday’s Y&R episode, Chelsea finally realizes that Victor is holding something over Adam. (CBS Screenshot)

Chelsea’s emotions have been running raged lately. Not only has she had to deal with Adam’s supposed friendship with Sage (Kelly Sullivan), but also his kidnapping. However, what she didn’t realize — until presently — was that Adam has been working as a double agent for Victor to take down the Santori family. On Thursday, she initially thought that Adam was working with Luca (Miles Gaston Villanueva), but he later told her about his master plan. Adam asked Chelsea if she believed him. Chelsea said that although she does, Adam doesn’t even realize he’s being manipulated by Victor once again.

In Friday’s episode, the friction between Adam and Chelsea continues as he tries convincing her that the dynamic between himself and Victor is different now. Chelsea won’t be convinced. She feels that him working with his corrupt father can only lead to trouble. Later, Chelsea picks up that Adam is being blackmailed by Victor, and insists that he tell her what Victor has over him.

Meanwhile, Abby (Melissa Ordway) told Victor on Thursday that she’s leaving Newman Enterprises for Jabot. On Friday, her father tries convincing her to stay. Ultimately, Abby — after Victor won’t let her in on what Adam’s working on — tells Victor that they have different opinions on what’s best for the company.

However, Abby later informs Jack that she won’t be working for Jabot. Abby says that she’s going to take over Gwen’s (Nadine Nicole) position and work with Ashley instead.

Ashley Refused to Return to Work at Jabot Cosmetics 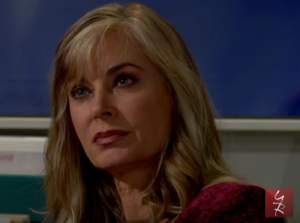 Ashley — pictured above in Friday’s Y&R episode — would rather stay put working with Neville than return to Jabot Cosmetics. (CBS Screenshot)

Ashley — unknown to anyone else besides Dr. Neville (Michael E. Knight) continues to receive treatment for a brain ailment. While she seemed to be recovering from a prior brain aneurysm, she’s fainted multiple times since. This could be the result of the stress in her life; watching her love, Stitch (Sean Carrington), marry her Abby and stepping down from her position Jabot. Fortunately, Neville’s methods on Ashley have been working well. After hearing the news for the doctor, she planted a kiss on him.

In Friday’s episode, Jack wants to know why Ashley’s still working with Neville. He’ll reason that Devon (Bryton James) is already investing in Neville’s treatment. Jack would like Ashley to return to Jabot. However, Ashley informs him that she’d like to continue on with Neville’s project. Although Jack won’t like this, Ashley stays firm on her decision. Little does Jack know that there’s more to her business partnership with Neville than meets his eye. 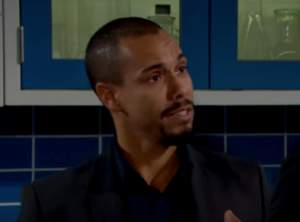 Devon — pictured above in Friday’s Y&R episode — still isn’t ready to forgive his father for sleeping with his ex-wife. (CBS Screenshot)

Neil (Kristoff St. John) has repeatedly tried to deter Hilary from pursuing him, even recruiting Nikki to pose as a bogus romantic suitor, as the two locked lips for New Years in front of Ashley. Later, Neil invited Nikki to a suite. Although the fake romance worked out for Nikki — Victor paid her more attention — Neil was still the object of Hilary’s desire. Later, she threw herself at Neil and the two hooked up at Neville’s lab. Making matters worse, Devon walked in on them getting hot and heavy.

On Friday, Neil tries smoothing things over with Devon. However, Devon doesn’t buy what he calls bull. Meanwhile, Hilary confronts Nikki about what she thinks is legit interference in Neil’s life. She tells Nikki to stop the high society act, saying that they both know that she used to be a stripper.

According to Celeb Dirty Laundry, “Hilary’s feelings for Devon will start to return.” The site reported that while Neil may be slightly disappointed, he’ll realize it’s what’s best for the situation.