The Young and the Restless returned on Thursday with an all-new episode as Phyllis (Gina Tognoni) argue with boasted to Billy (Jason Thompson) about the success of working with Natalie (Mara McCaffrey) while Chelsea (Melissa Claire Egan) accused Adam (Justin Hartley) of being under Victor’s (Eric Braeden) spell.

Victor Argued With Jack & Phyllis About Who Took Adam 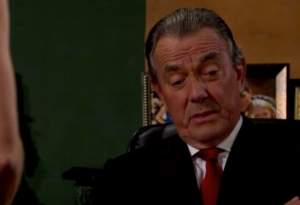 Victor — pictured above in Thursday’s Y&R episode — wants to get to the bottom of who kidnapped Adam from Newman Towers. (CBS Screenshot)

Victor and Jack (Peter Bergman) haven’t exactly had the best of relationships. Throughout the years, the two have been at each other’s throats, as the Abbotts battled the Newmans. However, the two seemed to be making some leeway at the hospital when Billy’s (Jason Thompson) health was declining. Victor acknowledged to Jack that he understood what he was going through. Unsurprisingly, this was short-lived, as Victor manipulated Kevin (Greg Rikaart) into giving up Billy’s spot in his cyber project. While he later backed out after hearing from Natalie that the project wasn’t complete, he’s now reconsidered. However, he doesn’t realize that Phyllis not only took the investment spot for Billy, but also was behind Adam’s kidnapping.

On Thursday, Victoria tells Billy — at the hospital — how thankful she is that Billy isn’y involved in the shady investment anymore. Later, Phyllis informs Billy that Natalie is doing a great job tricking Victor. Phyllis is thrilled that her plan to keep Billy is on the investment — and cut out Victor — is going as planned. However, Billy seems to be having second thoughts. Phyllis says she’s okay with Billy watching from the sidelines as she takes down Victor, if that’s what he prefers. Billy says he still wants to be a part of it; a little danger is good for him. Natalie shows and meets Billy. Natalie tells Billy that Phyllis really cares about him.

Later, Jack shows up and tells Billy he’d like him to return to work at Jabot when he’s able to. Billy says he’ll think about it. Jack says his office will be waiting for him when he’s healthy enough.

Meanwhile, Jack also offers Abby (Melissa Ordway) a job at Jabot Cosmetics. Shortly after, Abby informs Victor that she’ll be leaving Newman Enterprises to work for the Abbotts. She explains that it’s because she hasn’t been kept in the loop on important things that someone in her position (COO) should be; such as Adam’s kidnapping exchange.

Chelsea Suspected Adam’s Up to No Good Again 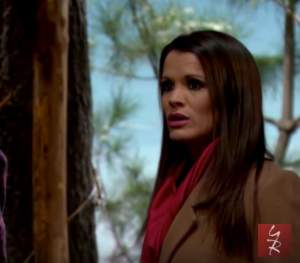 Chelsea suspects that Adam’s been getting himself involved in more shady business. (CBS Screenshot)

While Chelsea and Adam’s relationship hasn’t exactly been stellar, the two have seemed to get along quite well as of late. Victor had requested that Adam go to Spain to do some Newman family business when Adam was kidnapped from right inside the Newman Towers hallway. After finding out her husband was being held against his will, Chelsea agreed to work with the police on behalf of his exchange. At the fashion event for Chelsea 2.0, Adam was traded for Natalie, who — with the help of Dylan — got away from her kidnapper.

On Thursday, Chelsea catches Adam having a conversation with Luca in their living room; she presses them for information. Adam assures her that she’s got nothing to worry about, but she doesn’t believe him. She exits and speaks to Marisa (Sofia Pernas), who updates her on Adam and Luca’s plan.

Meanwhile, Luca (Miles Gaston Villanueva) updates Adam on the information Marisa got him. Luca shows Adam documents proving that Luca’s father has been involved in illegal business practices. Adam’s thrilled to see that everything’s going as planned. Luca insists that Adam follows through with his end of their agreement. Adam explains that his kidnapping stalled him. Adam says he needs to make his one attempt count, which Luca agrees with.

Also, Noah (Robert Adamson) asks Marisa whether the Santoris were be behind her kidnapping. Marisa admits that it was a threat from the inside. Later, Noah tells Luca that he wants in on his and Adam’s plan to take down their grandfathers.

Later, Adam explains to Chelsea that he’s really working with Victor to take down Luca and the Santoris. He admits that he’s dupping Luca. Chelsea says that she believes him, but thinks that Adam doesn’t even realize he’s being manipulated by Victor again.