The Young and the Restless returned on Wednesday as Sage (Kelly Sullivan) was admitted Dr. Anderson (Elizabeth Bogush) to Fairview, as herself and Nick (Joshua Morrow) proceeded with their plan to exploit her. Also, Ashley (Eileen Davidson) gives Dr. Neville (Michael E. Knight) a special thanks after he informs her about the early results of her treatment.

Read on for Y&R’s Wednesday, January 27, 2016 recap. Scroll down and click “Next Page” for spoilers on Sage being admitted to Fairview.

Sage Commits to Her Plan With Nick & Gets Admitted 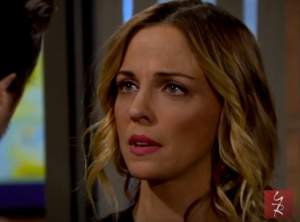 Sage — pictured in Wednesday’s Y&R episode — is looking to take down Dr. Anderson at all costs. (CBS Screenshot)

Chelsea (Melissa Claire Egan) and Adam (Justin Hartley) lay in bed together, enjoying each other’s company. Later, Chelsea tells Adam that she appreciates what Dylan (Steve Burton) did for him. Adam’s initially caught off guard, but understands it.

Meanwhile, Sage tells Nick that getting arrested wasn’t part of the plan. He wants to know what she was thinking by slapping Dr. Anderson and him. Sage acknowledges that things got out of hand, but she saw them getting close. Sage apologizes. Nick says they can use Sage’s apparent craziness to their advantage, but Nick says “there’s one wrinkle,” he has to get closer to Dr. Anderson to get more info out of her. Sage agrees to it.

Nick informs Dylan about Sage’s thoughts on Dr. Anderson. Dr. Anderson soon shows up, saying that she’ll drop the charges against Sage if he agrees to admit her. He does. Sage appears, asking “What the hell is she doing here?”

Adam and Chelsea show. Adam wants to know what’s going on with Sage. After being informed of the situation, he angrily tells Nick that Sage needs compassion after losing Christian, not a straight jacket. Nick tells him to mind his own business. Adam says it is his business; she’s his friend.

Adam goes to Dylan’s office to go over the kidnapping details. Dylan tells Adam that he shouldn’t give his opinion on Sage’s situation. Adam walks out of Dylan’s office in anger. He wants to take her out of the psych unit. She tells him that Nick’s doing this because he loves her. Sage is touched that he’s “outraged at this,” but she’s going through with the plan.

Nick is having second thoughts on having Sage admitted. Sage insists it’s worth the risk, if they can find out what Dr. Anderson’s hiding. They tell each other “I love you,” and proceed with the plan. Shortly after, Dr. Anderson asks Nick out to coffee, explaining that Sage will be in the waiting room for awhile. While they are out, Adam shows up at the hospital. Sage informs him of what Dr. Anderson’s up to. He still doesn’t understand why Nick would let her go through that. 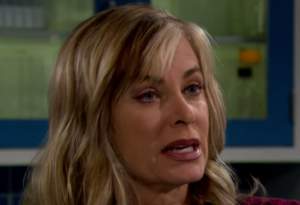 Stitch (Sean Carrington) tells Abby (Melissa Ordway) that he thinks he’s going to have a bruise from their ice skating session with Max (Jared Breeze), but it was worth it. Stitch gets paged to the hospital. Max agrees to spend the day with Abby.

Ashley tells Dr. Neville that she hated having to see her family going through what they did with Billy (Jason Thompson), which is why she thinks that if his methods fail, he end her life before her family has to. Dr. Neville is reluctant to do this. Ashley says that she doesn’t want Abby having to make the same decision that Jack (Peter Bergman) had to with Billy. Later, Dr. Neville and Ashley “commence to today’s treatment.”

Dylan tells Stitch he’s happy doing police work, but he doesn’t want it bringing Sharon back into a downward spiral. Stitch says that Dylan needs to do what’s best for himself, or he’ll be no good to her or Sully.

Dylan enjoys holding Sully, but tells Sharon he needs to leave for duty. She informs him about what Dr. Anderson said about Sage. Dylan assures he’d always protect her and Sully, if need be. Sharon informs Stitch that Nick and Sage broke up because he had her committed.

Meanwhile, Abby introduces Max to Dr. Neville and Ashley at the lab. Neville gives him a tour. She informs her mother that Max is “bratty and defiant.” Abby thinks it will cost her her marriage if this doesn’t change soon. Max enjoys learning about what Dr. Neville does. Later, Dr. Neville informs Ashley that the treatment is working. She kisses him in excitement.