The Young and the Restless returned on Tuesday with an all-new episode, as Neil (Kristoff St. John) was confronted by Devon (Bryton James) for sleeping with Hilary (Mishael Morgan) and Jill (Jess Walton) begged Jack (Peter Bergman) not to take Billy (Jason Thompson) off life support.

Read on for Y&R’s Tuesday, January 12, 2015 recap and scroll below to click “Next Page” for Wednesday’s spoilers. 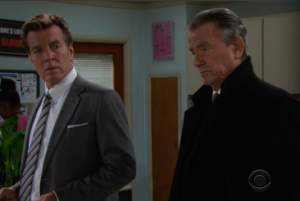 Pictured left to right, Jack and Victor experience a rare moment of agreement as it pertains to Billy’s future. (CBS Screenshot)

On Tuesday, Phyllis (Gina Tognoni) that she thinks a miracle can occur with Billy. Jack thinks all Dr. Neville (Michael E. Knight) has are theories. She reminds him that he saved Hilary. Jack says that nobody deserves a miracle more than Billy, but the doctors don’t think he can make it. Phyllis informs Jack that legally, Billy’s future is his decision. He’s surprised to hear it.

Later, Michael (Christian Jules LeBlanc) informs Jack that Billy’s life lays in his hands; he hands him papers. Jack’s conflicted on what to do.

Phyllis tells Victoria (Amelia Heinle) that herself and Jack were both in a coma, so it’s possible for Billy to pull through. Victoria disagrees, saying that they weren’t hooked up to machines like he is.

Victor acknowledges to Jack — who’s initially defensive — how tough the decision on Billy is. However, he knows Jack will make the right decision; he’s sure of it.

Jack admits he failed for Billy in the past, but not his love. Since Billy trusted him, so he’ll tell the doctors to take him off the machines; it’s time for him to be free. The Abbotts are in tears.

In the hospital room, Phyllis tells Billy “that’s who we are, we shoot for the moon.” She wants him to come back and be her friend. Later, Victoria is distraught, saying she hates Billy for this.
She says she can’t do this. Jill consoles her.

John’s (Jerry Douglas) ghost shows, telling Jack that there’s no room for guilt. He must makes this decision on Billy from “a place of love.” Jerry says he has the light on for Billy, if Jack decides to let him go. 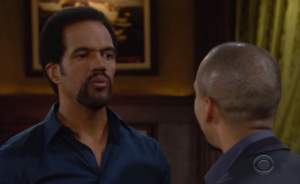 Pictured left to right, Neil and Devon are no longer on the same page after Devon caught his father sleeping with Hilary. (CBS Screenshot)

Meanwhile, Nikki (Melody Thomas Scott) confronts Victor (Eric Braeden) for trying to profit on Victoria’s grief; he disagrees. She says he should show his care for his family; he says she wasn’t doing that when she was in the suite with Neil.

Hilary tells Neil that she loves him, not Devon. Neil says he cares about Hilary, but not at his son’s expense. She calls him out on his situation with Nikki; saying it’s not real like theirs. He disagrees, saying it’s special.

Devon tells Lily (Christel Khalil) and Cane (Daniel Goddard) that Neil “is a lying two-faced son of a bitch.” He informs them about Neil and Hilary’s hook up. Hilary says the rest of her and Neil’s lives can start now. Neil disagrees and leaves.

Lily tells Cane that Neil must’ve had a moment of weakness. Later, Devon confronts Neil on the sex with Hilary in the lab.

At the lab, Lily confronts Hilary, who learns that Devon witnessed her and Neil together. Lily says she always knew that Hilary is “the same bitch she always was.” Hilary says that she can’t help that she’s in love with Neil.

Neil tells Devon that he never meant to hurt him. Devon doesn’t buy it and tells Neil that they are done as father and son. Neil tells Nikki that he doesn’t want to have feelings for Hilary. Nikki understands his frustrations, but tells him that their fake romance made Victor realize he can’t take her for granted. She wants to keep the phony affair going.

Later, Devon tells Cane that he refuses to walk away from Hilary; Cane’s shocked to hear it. Lily tells Hilary that the difference between them is that she’ll work on her marriage while she ruins others’ lives.