The Young and the Restless returned on Monday with an all-new episode as Adam’s (Justin Hartley) disappearance continues being investigated. 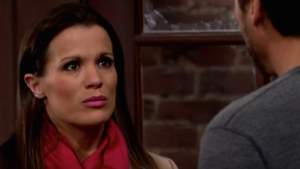 Pictured left to right, Chelsea and Nick, as Chelsea turns to him for assistance finding Adam. (CBS Screenshot)

Between making his relationship work with Chelsea (Melissa Claire Egan) and working as a double agent, Adam has kept himself quite busy lately. Although he has his qualms about Victor (Eric Braeden), he’s continued to stay loyal to him; even getting Luca (Miles Gaston Villanueva) to buy into a bogus alliance.

Last week, Adam informed Victor about Luca’s intentions to find Marco (Peter Bergman). In response, Victor sent Adam to Spain to take care of business. However, the situation didn’t pan out as planned with Adam being kidnapped straight from the Newman Towers hallway.

On Monday, Chelsea tells Dylan (Steve Burton) — who questions her relationship status — that herself and Adam are fine; she thinks Victor and the Santoris are behind his disappearance. She informs him that Adam was concerned about Luca.

Later, Marisa tells Noah (Robert Adamson) not to obsess over the accident; they did what they had to do. She reminisces over how he helped her when she first came to Genoa City. As they’re speaking, two suits come on behalf of Victor to take Marisa to him. Noah tries to join her, but the two men won’t let him. She goes voluntarily.

Luca tells Noah — who insists Victor would never kidnap Marisa — to wake up. He says that Victor’s been trying to get rid of her for months.

Natalie May Be the Girl Requested in Exchange for Adam 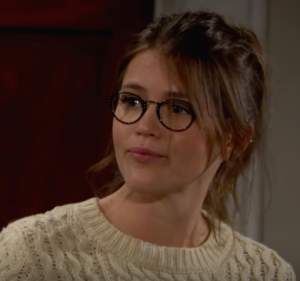 Natalie — pictured above in Monday’s Y&R episode — could be the girl sought from Victor in Adam’s kidnapper’s email. (CBS Screenshot)

For quite some time, Kevin has been talking up Natalie (Mara McCaffrey); the female hacker he was launching his security cyber project with. On Friday, Natalie showed up admitting that she had found her own investors, but that the project wasn’t perfected. Making matters worse, she took the money for herself. Worried for Natalie’s safety, Kevin invited her into his home while she figures out how to finalize the project.

On Monday, after some back and forth bickering, Natalie insists she came to Genoa City to see Kevin; not to steal his money. She blames the mess they’re in on Kevin’s convincing vision.

Later, Mariah (Camryn Grimes) queries Natalie on what her deal is with Kevin. Natalie wants to know that same about Mariah and Kevin.