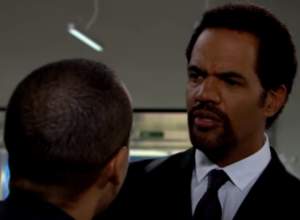 Pictured left to right, Devon and Neil, as Neil tries making things right between himself and his son. (CBS Screenshot)

Over the past month, Neil had been trying to steer clear of Hilary’s (Mishael Morgan) advances. To better assure that he achieved this, he even recruited Nikki (Melody Thomas Scott) to act as if they had something together. Although the plan worked wonders for Nikki — who was able to get more of Victor’s (Eric Braeden) attention — it did little for Neil. Ultimately, Neil ended up giving in to Hilary’s advances. Making matters worse, Devon caught the two getting hot and heavy in Neville’s lab.

On Friday, Neil tries making things right with his son, who still isn’t willing to forgive him.

“Why don’t you just talk to me instead of shutting me out?”

However, Devon — who refuses to move on from Hilary — isn’t buying what his father tells him.

“So I can hear more of your bull?”

Meanwhile, Hilary clearly hasn’t had any qualms about being upfront. She witnessed Neil and Nikki kissing each other — not knowing it was part of Neil’s plan to deter her — on New Year’s. On Friday, Hilary confronts Nikki by bringing up her regretful past.

“Why don’t you just drop the high society act. We both knew you were a stripper.”

Jack Wants to Know Why Ashley’s Still Working With Neville 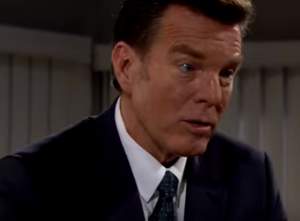 Jack — pictured above in Friday’s Y&R episode — is confused at why Ashley’s continuing to work with Dr. Neville. (CBS Screenshot)

Ashley has clearly made it a point to make some big changes in her life. She not only stepped down from her position at Jabot, but also had to get over losing her love, Stitch (Sean Carrington). In the process, symptoms of her brain ailment came back to haunt her. During that time, she decided to go into business with Dr. Neville, who’s methods cured Hilary. Later, after learning about Ashley’s health issue, Neville offered to work on her. Ashley accepted, and recently found out that the unorthodox treatment is working well. After hearing this, Ashley planted a kiss on Neville.

On Friday, Jack — who knows that Ashley is Neville’s partner on the treatment — questions her on why she’s still working with him.

“Neville is being funded by Devon. So why are you really still here?”

Could Jack be looking to get Ashley back at Jabot as he did with Billy and Abby, or is he simply concerned for her welfare around Neville?