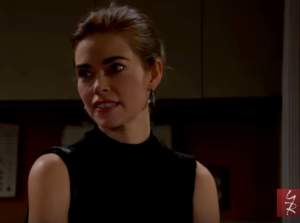 Victoria— pictured above in Monday’s Y&R episode — informs Phyllis that she’ll be in charge of the cyber security deal until Victor returns. (CBS Screenshot)

Kevin (Greg Rikaart) and Natalie’s (Mara McCaffrey) Internet security program has taken many twists and turns as Y&R fans learn more about its complexities. Natalie — who was living in Switzerland — make the trek to Genoa City to brief Kevin on the Internet security program discrepancies. To Kevin’s surprise,not only had she taken on other investors, but she admitted to not having the program finished. Ultimately, Kevin decided to take on Victor as an investor, and now Phyllis — who’s recruited a hospitalized Billy (Jason Thompson) — is trying to take him down.

On Monday, Victoria — to Billy’s dismay — informs Phyllis that she’ll be overseeing the ins and outs of it while Victor goes away.

“That Internet security deal that you mentioned, my father’s putting me in charge of that while he’s out of town.”

Is Billy on the fast track to disappointing Victoria again, or will Phyllis find a way to keep him protected? 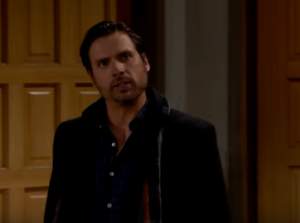 Nick — pictured in Monday’s Y&R episode — wants to have a chat with Adam and Chelsea about Sage. (CBS Screenshot)

Meanwhile, Sage — who’s keen on figuring out what Dr. Anderson’s (Elizabeth Bogush) motives are with Nick — is now at Fairview under doctors’ care. Prior to that, she slapped both Nick — who’s trying his best to go along with her plan — and Dr. Anderson. In response to her physical violence, Dr. Anderson had Sage arrested.

On Monday, Dr. Shelby (Terell Tilford) tries having a one-on-one conversation with Sage to make sense of what’s going on.

“It’s just the two of us now. Suppose you tell me what’s really going on.”

Later, Nick — who’s trying to get past his issues with Adam about Sage — confronts Adam about the situation.

“We need to talk about Sage. Let’s just get everything out in the open.”

Do Adam’s feelings for Sage remain, or does he genuinely care about their friendship?