1. She Was in Paris in December, the Same Time Tyga Was There for a Gig

In their report on Mercado, TMZ refers to her as a “Kylie Jenner look-alike.” The gossip site says that she was Tyga’s guest in Paris during one of his shows there. Photos on both Tyga and Mercado’s Instagram pages show them in the city at the same time. Officially, Kylie and Tyga are still together, but they might be taking some time off from each other while they focus on their respective careers. In an interview with Ellen in November 2015, amid rumors that Jenner and Tyga were splitting, Jenner said, “We became best friends before anything happened so I think that’s awesome and we’re just like, I don’t know, hanging out. Living life … We’re still together.”

2. She Has a Bachelors Degree in Broadcast Journalism & Doesn’t Shave Her Legs Unless She Has to

In the above video, Mercado explains that she has a bachelors degree in broadcast journalism, graduating with honors. Her name is short for Valeria. She adds in the video that she doesn’t shave her legs unless she has to because she’s wearing a dress and that her biggest fear is a paper cut. Another bombshell in the video is that she’s been in two relationships and was once engaged. An Instagram post from December 2015 showed Mercado with her little brother who is in the U.S. Army.

In a feature on XXL Magazine, Mercado says that she’s a native of New York City, though she dislikes the city and now lives in Los Angeles. One of her millions of selfies on Instagram shows her at New York Jets game. A separate Maxim feature says that Mercado got her start when she modeled for Seventeen Magazine. She now works as a model for Buffalo Jeans, according to the magazine.

On her Instagram page, Mercado has one million followers. She also operates a “backup” account where she goes by the moniker “@Clothesmindex3.” That account is private and judging by the relatively small number of followers, 852, it may be used for private purposes. That pseudonym is also the one that Mercado uses on her Tumblr page.

5. Prior to the Mercado Story, Tyga Was Last Seen Partying in a Strip Club With Khloe Kardashian’s Beau James Harden

Despite, possibly being involved with two women, the last time Tyga hit the tabloids was earlier in the week when he hit a strip club with James Harden and Scott Disick, reported Radar Online. The trio hit the Ace of Diamonds strip club in Los Angeles, according to the Daily Mail. 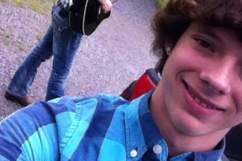