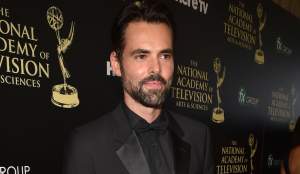 The Young and the Restless returns on Monday with a brand new episode, as Billy’s (Burgess Jenkins) livelihood hangs in the balance.

However, next week marks the inception of actor Jason Thompson, who’ll take over the role from Jenkins on Wednesday, January 13.

In lieu of this, Thompson has reportedly been prepping for the highly-coveted part with a former Billy, actor Billy Miller, according to CBS Soaps In Depth.

Read on for the latest on Thompson’s transition into the Billy Abbott role.

Donning the role of Dr. Patrick Drake on General Hospital since 2005, Thompson knows a thing or two about the soap world. While he’s yet to nab an Emmy Award, he has been nominated for five of them.

To better prep himself for the role of the spoiled and stubborn Abbott, Thompson picked the brain of his GH cast mate, Miller, who also happened to win three Emmy Awards playing Billy. Miller is the longest-reigning Billy to date at six years (2008-2014).

Although Thompson is no stranger to playing the bad boy, it will be a considerable transition from neurosurgeon to the Abbott’s black sheep. Due to this, the 39-year-old sought Miller’s advice on Billy’s history.

Thompson told CBS Soaps In Depth that Miller — three years his junior — was “very open” as well as “very cool” when it came to the process.

Thompson will debut as Billy on Y&R’s Wednesday, January 13 episode. Jenkins was last seen as the hospitalized character prior to his storyline surgery for brain pressure alleviation due to an assault.

On November 20, 2015 Jenkins, 42, took to Twitter to announce that he’d be exiting the program to be closer to his family on the east coast.

On October 30, 2015, Thompson made the announcement on his Instagram that he’d be departing GH.

X..I'm speechless..but I will say this :) 10 years ago when I walked onto the GH set I was told I had "13 weeks to see if it works out.." Yes it's hard work, commitment and passion for what I am so grateful to do. But truly, it's people like YOU who have gone out of their way to support not only myself but fellow actors and artist. We are all fans..I am eternally thankful I am among you.

On November 20, 2015 — the same day Jenkins spoke about his Y&R exit — Thompson indicated it was his last day on a GH set.

Yesterday morning. Nov 20th. 5:55 am. It was my birthday and also my last day of playing Patrick Drake on GH after 10 years. It was a long, emotional, exhausting, thrilling at times overwhelming day, and I am so grateful for every one of those moments. Change can be exciting and scary all at once. Shake it up..see what comes out. Thank you for the Birthday wishes. Thank you for the well wishes. See you soon.

Just how Thompson will be transitioned into the role of Billy is still unknown. However, the popular program may go with a storyline it’s no stranger to: plastic surgery.

Such an approach was made when the upper brass decided to cast Justin Hartley in place of Michael Muhney as Adam Newman in 2015.