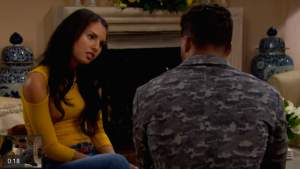 While Zende (Rome Flynn) and Nicole’s (Reign Edwards) relationship is still intact, there relationship is on the rocks. A potential breakup on The Bold and the Beautiful undoubtedly looms after Sasha informed Zende that Nicole’s behind her dismissal from Forrester Creations.

Amid recent B&B events, fans are certainly wondering what lays ahead in the possible love triangle. Read on for a thorough analysis.

The situation between Nicole and Sasha is quite complex, as the two best friends — unknown to Nicole — are sisters. Hailing from Illinois, Sasha is keen on staying put in LA. This looked to be the case when Rick — after seeing the collaborative chemistry between Zende and Sasha — offered her a print model position as Forrester Creations. The reason Sasha received the opportunity was because Nicole’s session was cut short because she came down with pregnancy-related morning sickness.

When Nicole first caught wind of Zende and Sasha’s photography chemistry, she said she was happy for them. However, as time went on, she felt they were getting too close. Ultimately, Nicole began considering Sasha a threat to her relationship, which she’s already insecure about; being the circumstances surrounding her pregnancy. As a favor to Rick (Jacob Young) and Maya (Karla Mosley), Nicole agreed to be a surrogate. Feeling indebted to Nicole, Rick agreed to rescind his offer to Sasha due to Nicole’s jealousy.

Unbeknownst to Nicole, Sasha was outside of Rick’s office listening to her talk about how Sasha would take advantage of the situation with Zende, given the opportunity. Later, Sasha informed Zende that Nicole was behind her shattered dreams. Eventually, Zende asked Nicole — in front of Sasha — and she admitted to it. Feeling remorseful, Nicole told Sasha that she’d talk to Rick again because she’d make a great Forrester print model.

At the moment, Zende seems receptive to Nicole’s guilt, but that can change rather quickly. Carter (Lawrence Saint-Victor) has already planted the thought in Zende’s head that he can do better than Nicole. Also, as Zende’s photography career continues building and Nicole gets Sasha rehired, they’ll likely become even more comfortable with each other.

With Sasha, Zende wouldn’t have to deal with the complications of a pregnancy, especially since Nicole isn’t that far along. This would certainly make the working environment tense at Forrester, but Zende and Sasha’s reputation could open up more photography opportunities both individually and collectively.

Although it’s still unknown what’s in the cards for Zende and Nicole’s future, two things appear to be certain: rocky waters are ahead for the couple and Sasha isn’t leaving LA.