Oliver Queen (Stephen Amell) is facing a dilemma. Of the moral variety. The man better known as Arrow was offered a proposition at the end of last episode, a chance from Nyssa to save Thea's (Willa Holland) life. But on one condition. Oliver has to kill Malcolm Merlyn (John Barrowman). Oh. Of course, this is Oliver we're talking about and taking a life - even Malcolm's - is no easy decision. In fact, the masked superhero is torn at the thought of it in tonight's brand-new episode of The CW hit, titled "Sins of the Father." Naturally, Oliver's dilemma over his situation with Malcolm will be the focus of tonight's new episode, but fans can also expect several other storylines, including a new focus (and challenge) for Olicity. Our shipper hearts can hardly stand it. Click through the gallery to check out the rest of the spoilers for tonight's new episode. Arrow airs at 8 p.m. ET on Wednesday. (Bettina Strauss/ The CW) 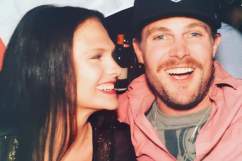 Who Is Stephen Amell’s Wife?

Read More
Arrow, CW, TV
Malcolm is in danger and Olicity is facing a big-time relationship decision in the brand-new episode of 'Arrow.' We've got all the latest spoilers here.