On tonight’s episode of The Bachelor, Ben Higgins takes the remaining six women back to his hometown of Warsaw, Indiana. We see his family, where he went to high school, and we get to experience some solo dates with Higgins. This is the episode before the girls’ hometown dates, so it is very important for Higgins to figure out who gets eliminated. Tonight, we say goodbye to two favorites this season, so if you don’t want to know any spoilers, you have come to the wrong place. Stop reading if you don’t want to know what happens on the show tonight.

Lauren Bushnell Hangs Out with Higgins at His Local Youth Center

Front-runner Lauren Bushnell gets one of the solo dates tonight and she gets to experience a bit of Higgins’ childhood. Growing up, Higgins was very involved with his church, the Baker Youth Club and charity work. So, Bushnell and Higgins spend some time with kids at the youth center where he used to volunteer. Indiana Pacers’ superstar George Paul and his teammates show up to shoot some hoops with the children as well.

Later on, the two went to a local bar called Rex’s Rendezvous.

Twin Emily Ferguson feels a little intimidated when Ben Higgins brings her to meet his parents for their date. David and Amy Higgins are put front-and-center on the show, giving Ferguson a reverse hometown date. Unfortunately, according to Reality Steve, Ferguson gets sent home after meeting Higgins’ parents.

Joelle “JoJo” Fletcher Gets a Baseball Date at Wrigley Field

JoJo tells Ben Higgins that she is falling in love with him on The Bachelor. According to ABC, this is the run-down on their solo date tonight:

JoJo and Ben travel to Chicago for a wonderful day at famed Wrigley Field, the home of Ben’s beloved Chicago Cubs. A romantic dinner in the middle of center field enables JoJo to open up about her past relationships and her fear of being hurt again.

JoJo reveals that she has high hopes for herself and Higgins, but won’t put all her eggs in one basket until he is down on one knee.

The Top 4 Contestants Are …

On tonight’s group date, Becca Tilley, Caila Quinn and Amanda Stanton get pitted against each other to win a rose, securing a hometown date for next week. Stanton is the reported winner and gets a carnival date with Higgins afterwards. Unfortunately for Becca Tilley, she ends up getting sent home tonight. So, the final four are Amanda Stanton, Caila Quinn, JoJo Fletcher, and Lauren Bushnell. 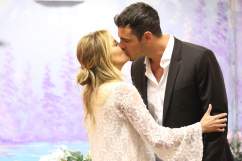 Read More
Reality TV, The Bachelor, TV
It's episode 7 of The Bachelor 2016 with Ben Higgins. Get the best season 20 spoilers for tonight, plus video clips right here.