Billions returns on Sunday with an all-new episode titled, Short Squeeze as Bobby (Damian Lewis) finds himself being challenged by both Chuck (Paul Giamatti) and his father, Chuck Sr. (Jeffrey DeMunn). Axe is in for a rude awakening while flying off in his private jet to see Metallica perform. 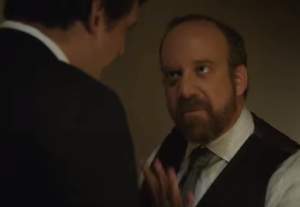 From left to right, Bryan and Chuck, as Chuck makes his intentions crystal clear as they pertain to Bobby Axelrod. (Showtime Screenshot)

Living a life of luxury comes with great responsibility and such is the case for Axe, who continues wheeling, dealing and high rolling. Bobby’s never-ending desire to maintain his power — whether he’s careful about showing his hand or not — is now being compromised by Chuck (Paul Giamatti). Chuck continues biding his time — at the conservation of his flawless financial crime record — until he’s absolutely certain that Bobby will be his 82nd victory.

Regardless of the constant pressures Bobby faces in order to steer clear of Chuck and the SEC, he still likes to let his hair down from time to time, especially as it pertains to his favorite band, Metallica.

On Sunday, Axe informs Wags (David Costabile) that he’s like to fly out to see the band’s performance; a rare commodity these days.

Clearly ready for his next business venture — after landing a spot on the board of directors at YumTime — Axe is later shown a briefcase full of candy, cookies and candles from a prospective company he may want to invest in.

Meanwhile, Chuck continues putting together a strategy on how he’ll ultimately take down Axe. On Sunday, Chuck makes his disdain for Axe evident when he explains to Bryan (Toby Leonard Moore) just what he’d like to do to the corrupt hedge fund mogul.

“I wanna put him on the rack and stretch him.” 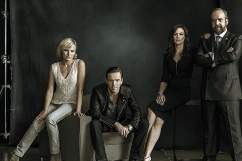 Axe Reacts to the Rhoades’s Wrath 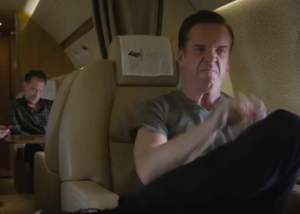 “I have reason to believe that Rhoades Sr. is making a play against me.”

With Axe Capital’s back against the wall, Axe appears ready and willing to remove Axe Capital from its business dealings.

Wags — surprised to hear his boss retreating — warns Bobby that such a move would be detrimental to himself and the Axe Capital’s image.

Despite this, Axe still interrupts, making his intentions to Wags clear.

Does Axe fully intend on pulling out of his business dealings, or will he reconsider his stance and find a legal loophole out of the ordeal? Stay tuned.

Showtime’s Billions airs on Showtime on Sundays at 10pm ET. Be sure to check back with Heavy for all its latest spoilers and updates.