We were born in the same area and grew up in the same town our whole lives. He has it and i have it. And i dont get why its a "thing". Yes. That Methuen aka "mingia valley" accent def comes out when i am pissed off or around family. Combine the both…. And watch out! My family and friends know who i am ;) Anyone have a problem with that? Kick rocks. ? #family #mtv #thechallenge #boston #methuen #dontmess #cousins #represent #home

Who won tonight’s finale of MTV’s The Challenge: Bloodlines? The winners are … Cara Maria Sorbello and Jamie Banks.

The final three teams in part two of the finale were Jenna Compono and cousin Brianna Julig; Cara Maria Sorbello and cousin Jamie Banks; and Cory Wharton and cousin Mitch Reid. And, tonight’s challenges were mentally, physically and emotionally difficult.

As the contestants battled through, the show also covered their journeys throughout the season. It was a very tight race and all times had to be tallied to find out the winner.

Jenna and Brianna were announced as winning $25,000 for third place. Then it was down to the other two teams, but it was Cara Maria and Jamie who won $250,000. Cory and Mitch walked away with $75,000, so second place isn’t too shabby either. 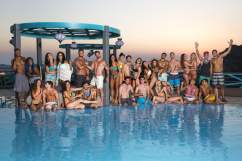