Female race car driver, Danica Patrick, threw Charlotte, North Carolina residents for a loop when she posed as a Lyft driver. In the three-minute video shown above, the 33-year-old — sporting aviator shades and a beanie — took three lucky passengers to their destinations.

The first passenger was a female, who informed Patrick that she was in sales. To the chuckle of the woman, Patrick gave the following response:

The second passenger was a male and queried Patrick on how it was going for her.

Patrick garnered a laugh from him as well.

She not only warned the third passenger — a younger male — about her driving abilities but also said that her boyfriend wasn’t too crazy about it.

“Buckle up for safety. You might need it. My boyfriend thinks I’m a horrible driver.”

“Because I don’t follow the rules, I drive too fast. I ride too close.”

“Sometimes I come around the corner here and pretend like I’m crossing the finish line.”

I try to get 500 miles in on Sundays and I try to do it in under four hours.” 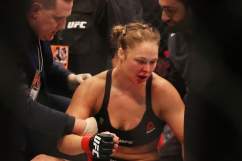