General Hospital returns on Friday with an all-new episode as Sam’s (Kelly Monaco) ready to leave the hospital while Jason (Billy Miller) thinks she should stay put.

Also, further spoilers ahead indicate that Helena’s (Constance Towers) will reading reportedly comes with several “shocks and surprises,”” according to Celeb Dirty Laundry</a, similar to her lving past.

Read on for GH’s Friday, February 12, 2016 spoilers and further ahead to see what lies ahead at the will reading. 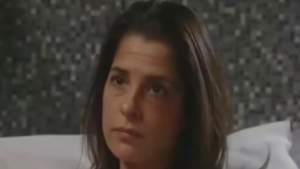 Sam — pictured in Friday’s GH episode — has been waiting quite some time for romance with Jason. (ABC Screenshot)

On Friday, Sam — after surviving a fire — is just about ready to up and leave the hospital. However, Jason would like her to stay and heal up. The site speculates on whether the two will get “a long-awaited and very steamy kiss.” After all, GH fans know full well that it’s been a long time coming for Sam.

Meanwhile, Nathan (Ryan Paevey) and Maxie (Kirsten Storms) look to reunite their best friends as the two could “go all out to try and get Dante Falconeri (Dominic Zamprogna) and Lulu Spencer (Emme Rylan) back together.” However, unbeknownst to Maxie, Nathan’s got another plan up his sleeve; a ring he’ll propose with.

Also, Molly (Haley Pullos) — who wants Kristina (Lexi Ainsworth) to be who she is — would like her to be frank with her on whether she’s gay. Molly sees everything she read inside Kristina’s diary in a different light after Alexis (Nancy Lee Grahn) spoke about Parker (Ashley Jones) being a woman.

‘Shocks and Surprises’ Set for Helena’s Will Reading 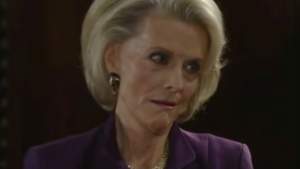 Helena — pictured above in a 2012 GH episode — will likely have concerns raised when her will is read. (ABC Screenshot)

Further ahead spoilers indicate the likely attendeees to the late Helena’s will reading. On hand at the above-mentioned event will be Laura (Genie Francis), Nikolas (Tyler Christopher) and Scotty (Kin Shriner), who informs a shocked Laura about it.

Judging by Hayden’s (Rebecca Budig) concern over her husband and mother-in-law, she should be present as well. Although Spencer (Nicholas Bechtel) has had a lot on his plate lately, the site reported that he may be present as well. Meanwhile, Morgan and Jason should also be in attendance. However, she’ll most certainly want to be romancing him.

It’s still up in the air on whether Luke (Anthony Geary) will be present for the reading. Although Helena was fond of him, she also wanted him dead.

Read More
TV
Sam's ready to leave the hospital while Jason doesn't agree with it. Also, the latest General Hospital spoilers indicate who could be at Helena's will reading.