Johnny Depp, Alice Cooper and Joe Perry performed as the band Hollywood Vampires at tonight’s 2016 Grammy Awards. The band got together to pay tribute to the late Motorhead rock icon Ian Fraser Kilmister, who most called “Lemmy.”

The set was surrounded by smoke and fire and was a true rock n’roll act, debuting the song “Bad As I Am.” Cooper was on lead vocals with Johnny Depp and Joe Perry on guitar, along with a few other musicians on the drums and additional guitars. Cooper donned his usual black eye makeup and walked the stage with a “blood-stained” shirt, leather pants and a whip.

This was the band’s first television debut.

The band pays homage to the celebrity drinking club from the 1960s and 70s, a club that Alice Cooper was an original member of … A few years ago, Cooper and friend Johnny Depp felt that there should be a revival of the club, but in the form of a band. Their friend Joe Perry was then brought on board as well. In September 2015, the band released its first album together. The band pays tribute to Cooper’s old drinking buddies and plays a lot of cover songs, with a couple original tunes as well. 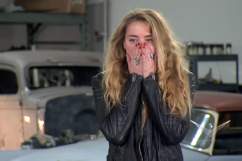