” in addition to other reports as well. Bernie Madoff’s Ponzi scheme is considered to be the largest financial scam in United States history and the scandal made headlines in 2008-2009. Former NASDAQ Chairman Bernard Madoff and founder of the Wall Street firm Bernard L. Madoff Investment Securities LLC, admitted to his wrong-doings in December 2008. Finally, in November 2015, it was announced that $1.42 billion was authorized by U.S. judges to be divided among victims of Madoff’s scheme. This miniseries gives us a look inside of the mind of Madoff, the man who pulled off one of the biggest cons in our nation’s history.

EXTRA TV SPECIAL: “Madoff: After the Fall” documentary at 10 p.m. ET/PT on ABC 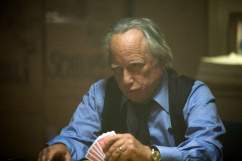 ‘Madoff’ on ABC Live Stream: How to Watch the TV Show Online

Read More
TV
ABC show Madoff premieres on TV tonight. Get the station info, what channel to watch, when and what time it's on, etc.