Actress Meryl Streep has created a controversy by saying “we’re all Africans, really,” while speaking about the issue of the lack of diversity in Hollywood.

Streep is the latest celebrity to get into hot water while trying to tackle the #OscarsSoWhite issue, following Schindler’s List producer Gerald Molen, actor Michael Caine and actress Charlotte Rampling.

Rampling said the controversy and the decision by many entertainers of color to skip this year’s Oscars is “racist.”

Streep was speaking at the Berlin Film Festival, where she is serving as the jury president. The judging panel at the festival is made up of all white men and women.

Reaction to her comments has made Streep a trending topic on Twitter for most of the day Thursday. Here is some of what is being said about her quote:

Meryl Streep's comments about diversity may be controversial, but they've already earned her her 20th Oscar nomination.

The problem with Meryl streep's statement is the intent "we all come from one place, so who cares if minorities are not represented"

If Meryl Streep was trying to say we all originate from Africa, then say that. And know that isn't a defense for an all-white film jury.

I am going to let Miranda Priestly sum up how I feel about Meryl Streep right now: pic.twitter.com/bEshVBjkHu 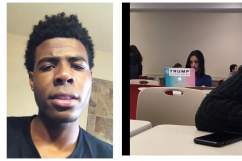