Peter Gunz has made his bed and he has definitely been lying in it. His baby mamas Tara Wallace and Amina Buddafly are at odds on Love & Hip Hop: New York after it was revealed that he was messing with both of them. To make matters worse, when the truth about his two-timing was revealed, Amina let it be known that she was pregnant. Because of the turmoil he was putting her through and because of the situation, Amina did not want to have another baby with Peter. In turn, she ended up having an abortion. Meanwhile, Tara discovers that she is also pregnant. When she reveals this to Peter, he realizes that he has to tell Amina. What he’s worried about is that Amina will be hurt that he didn’t stop her from having an abortion while Tara is having his child again. On tonight’s episode of LHHNY, Peter comes clean to Amina and let’s her know about Tara’s pregnancy. She clearly is devastated and asks him how he could do that when “she just killed her baby.”

I gave the world ammunition to shoot at a queen, and although my apologies may never suffice, I hope that when the doctor lays gunner on your chest he will erase every ugly evil thing said that may have pierced your skin….

Check out these Instagram posts of Gunz’ baby on the way.

Fuck the world see y'all in 2 weeks.. 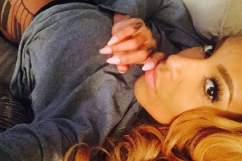 Read More
Reality TV, TV
Peter Gunz' baby mamas are at odds as Amina Buddafly gets an abortion and Tara Wallace reveals she is pregnant on LHHNY. Get the latest details here.