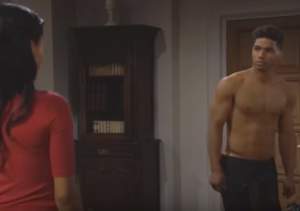 Sasha continues trying to put the moves on Zende. Although Nicole (Reign Edwards) got her one-time bestie her modeling job back — after having her fired at Forrester — Sasha won’t let the situation go. Nonetheless, she’s extremely into Zende, who she’s starting to be vocal about it with. In the process, Sasha keeps insisting that she owes no loyalty to Nicole.

On Thursday, Sasha continues making a case for why Zende should be her friend with benefits. With Nicole at dinner with the Forresters, she thinks that it’s perfect timing for them to hook up at Zende’s.

“Your girl’s with Rick and her grandpa right now, celebrating her pregnancy. You know, the baby she’s having for her sister?”

Katie Says That Brooke’s Exhausted Her Chances With Her 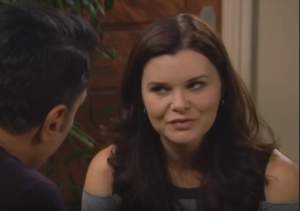 Katie — pictured above in Thursday’s B&B episode — continues venting about her frustrations with Brooke. (CBS Screenshot)

Meanwhile, Katie continues to harp on Brooke’s betrayal. While Katie eavesdropped from outside Bill’s office, Brooke told her husband that she’ll always love him. This ultimately led to Katie cutting her from her life and Brooke leaving Spencer Publications.

On Thursday, Katie tells Bill — who Brooke’s betrayed her with in the past — that her sister has exhausted her chances.

“I’ve given her so many chances over the years, and all she ever does is break my trust. I would be stupid to let her do it again.”

Quinn Assures Liam That He’s Safe With Her 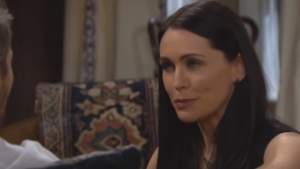 Liam continues to obliviously stay at Quinn’s Topanga cabin and throw her compliments. Evidently, his memory loss has given him a whole new perspective on her. Quinn continues trying to buy Wyatt (Darin Brooks) more time to connect with Steffy (Jacqueline MacInnes Wood). In the process, it appears that she’s welcoming the attention she’s getting from Liam.

On Wednesday, Quinn assures Liam that all will be well as long as he stays put at her cabin.

“As long as you stay here with me, you’re going to be okay.”