The Bold and the Beautiful returns on Wednesday with an all-new episode as Sasha (Felisha Cooper) expresses her feelings to Zende (Rome Flynn) about Nicole (Reign Edwards) while Eric (John McCook) tries reasoning with Brooke (Katherine Kelly Lang) about her situation with Katie (Heather Tom). 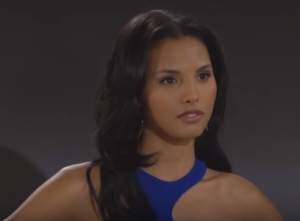 In Tuesday’s episode, Sasha — who got her Forrester Creations print modeling gig back — made it clear to both Julius (Obba Babatunde) and Zende that Nicole is no longer her problem. Julius continues trying to assure that the family secret of him being Sasha’s biological father stays just that. Meanwhile, Sasha — hellbent on staying put in LA — acknowledged that he’s the very reason for her daddy issues. In the process, she told her father that Zende is way too fine for a nerdy Nicole.

Later, while Zende snapped photos of Sasha, she told him that she was ready for her closeup. She then got extremely close to him. In response, Zende reminded her that he’s taken.

On Wednesday, Sasha and Zende continue with their photo shoot. While striking poses, Sasha — who has an unwavering desire to get back at Nicole — informs Zende that she’d like to make her secret sister/former best friend pay for getting her fired in the first place. She’d like to prove that Nicole was correct in thinking that she’d take advantage of her situation with him.

“You know, maybe I should teach her a lesson. Prove her right.”

Later, Nicole — whose already acknowledged the power of Sasha’s beauty — tells Maya (Karla Mosley) that Sasha don’t need to get jealous because they never get rejected.

“Girls like Sasha don’t get jealous. They get what they want.”

Back inside the Forrester studio with Zende, Sasha seemingly eases up on her disdain for Nicole while speaking to Zende, who’s shirtless.

“We’ve known each other our whole lives. I’ve never seen her be this selfish.”

Does Zende’s lack of a shirt indicate that he gave into temptation, or does he still remain faithful to Nicole? 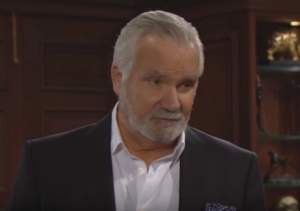 Eric — pictured in Wednesday’s B&B episode — has been Brooke’s rock since Katie cut her from her life. (CBS Screenshot)

Meanwhile, Katie continued to vent to Bill (Don Diamont) about how upset she was over Brooke’s betrayal. While Bill appeared sympathetic to a crying Katie, he was indirectly defending Brooke, which initially concerned Katie. However, she later thanked her husband for being there for her.

Later, she tried making sense of what Brooke did, blaming herself for thinking Brooke could change. As Katie confided in Bill, Brooke continued opening up to Eric, who’s been her rock through this tough time. Brooke admitted to still loving Bill, but also keeps insisting that she would’ve never pursued things further.

On Wednesday, Brooke speaks to Eric some more. In response, Eric — the voice of reason — tells her that her sister needs to trust her sister. He feels the only way Katie can do that is by seeing that she won’t be a home wrecker.

“She has to realize that you’re not a threat to her family. You’re part of it.”

Will Katie find it in her heart to forgive Katie a second time for Bill, or will Brooke continue to be estranged from her sister? Stay tuned.