The Bold and the Beautiful returned on Monday with an all-new episode as Deacon (Sean Kanan) paid Quinn (Rena Sofer) an unannounced visit while Wyatt (Darin Brooks) expressed his interest in a long-term future with Steffy (Jacqueline MacInnes Wood).

Read on for B&B’s Monday, February 8, 2016 recap. For Wyatt-Steffy wedding spoilers, click here or scroll below to click the “Next Page” button. 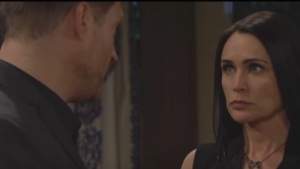 From left to right, Deacon and Quinn, as Deacon’s appearance at Quinn’s cabin caught her off guard. (CBS Screenshot)

At Quinn’s cabin, Liam (Scott Clifton) tells Quinn not to be afraid for him; he’s better now. Quinn says he doesn’t realize how much their relationship’s changed. He says he owes her so much. She brushes his cheek. Quinn says he’s like a child who’s never been hurt before; she used to be that way once. Liam says for her not to be sad or afraid. Liam wonders if he and Quinn had a fight. He asks her if there’s someplace he’s supposed to be. Quinn says that if he left, he’d be lost in his condition. Liam says there’s some sort of a promise that he’s made that he’s not keeping.

Quinn tells Liam that she was an inconvenience to her mother. Quinn flashes back to her childhood as her mother gets mad at her for walking him on her with another man. Quinn’s mother calls her a little witch. Quinn says her mother never wanted to have any children and always questioned her as to why she was ever born. Quinn get emotional, saying she’s never told anyone this until now. Liam wonders if himself and Quinn are divorced because he sees nothing of his at her cabin. Quinn says it’s because everything’s still back at their old place. Liam says he supposes that she could’ve programmed him, “you never know.” Quinn says people tell her she’s very controlling and that she doesn’t want to be that way anymore. Liam says that she should tell him a story about her then.

Liam apologizes for making Quinn recall her nightmarish childhood; he tells her that he likes the person she is right now. Quinn says he didn’t always feel the way he does about her now and he needs some rest. She kisses him on the forehead and exits the room. A short while later, there’s a knock from someone posing as a delivery man. It’s Deacon, who invites himself in saying that her cabin’s cute. Quinn assumes he wants money. He says he’s not there for that but takes it anyway. Deacon picks up she’s got another man in the house. He opens the door and is shocked to see that it’s Liam.

Steffy’s Not Ready to Fully Commit to Wyatt Just Yet 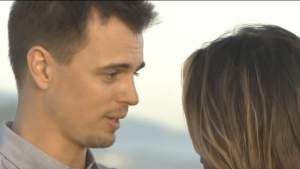 Pictured left to right, Wyatt and Steffy, as Wyatt continues moving forward on his quest to get Steffy to commit to him. (CBS Screenshot

Sitting on the beach, Steffy wonders to herself just where Liam is. She returns from the ocean and informs Wyatt about how peaceful it is. Wyatt says it could be her home if she wants it to be. He informs Steffy that he’s like to spend the rest of his life with her. He says the most important thing in this world is knowing what you want. She says that still not over Liam. Wyatt doesn’t understand why she would continue having hope for Liam. Steffy says she needs to hear Liam tell her that it’s over in person. She wants to know if Wyatt’s upset with him. He says no, he can’t expect her to just move on from a broken heart. Steffy wants to know if Quinn’s always been fierce. Wyatt insists that she’s changed. Steffy asks Wyatt if he thinks Liam could be dead, sick or in trouble. Wyatt says dead people don’t text and when people are hurt it never makes sense. Steffy says it feels weird and impersonal.

Katie (Heather Tom) says that Ivy (Ashleigh Brewer) and Wyatt seemed happy. Bill (Don Diamont) says it’s very important that a guy do anything he can to be the man his wife wants him to be; he’s the perfect example. He acknowledges that he makes the occasional mistake but he does apologize. Katie says that with Bill she can be confident and stand up for herself. She says that bringing Brooke into Forrester was crazy and wonders why he didn’t warn her.