The Young and the Restless returns on Tuesday with an all-new episode as Nick (Joshua Morrow) is shocked to see Sharon (Sharon Case) still siding with Dr. Anderson (Elizabeth Bogush) while Hilary (Mishael Morgan) informs Neil (Kristoff St. John) that she can’t bring herself to sign the divorce papers from Devon (Bryton James). 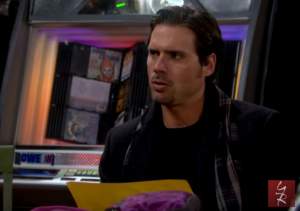 Nick — pictured above in Tuesday’s Y&R episode — is shocked to hear that Sharon spoke about Sage to Faith. (CBS Screenshot)

Evidently, there’s no turning back for Nick and Sage (Kelly Sullivan) when it comes to their plan of exposing Dr. Anderson for her true motives. After getting fed up with Dr. A prying into her and Nick’s business, Sage finally said enough is enough. She’s constructed a plan with Nick — that involves him getting close to Dr. A — for her to feel extremely close to him. The couple’s end goal is to have her confess what she wants to Nick.

While it wasn’t exactly agreed upon, Sage — in an anger outburst slapped both Nick and Dr. A — after hearing she was being spoken about. In response, Dr. Anderson got her arrested. Nick — having his doubts — asked Sage to reconsider their plan. However, Sage insisted that they keep pressing forward. Presently, Sage now finds herself checked into Fairview, and at the point of no return.

On Tuesday, Nick is shocked to hear Faith (Alyvia Alyn Lind) tell him that Sage isn’t coming home for quite some time.

“Sage is sick and she might not be coming home for awhile.”

In response, Nick queries Sharon on who told their daughter that.

“Who told you that?”

Will Sharon sabotage Nick and Sage’s plan, or will she finally come to her senses on the twisted nature of her doctor and friend?

Hilary May Be Reconsidering Her Stance on Devon 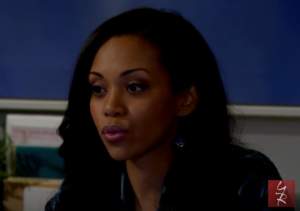 Hilary — pictured above in Tuesday’s Y&R episode — may be having second thoughts about her lack of feelings for Devon. (CBS Screenshot)

Meanwhile, Neil continues trying to patch up his relationship with Devon after the latter caught him sleeping with Hilary, his ex-wife. For some time, Neil’s tried — without success — to deter Hilary from pursuing him. He’s even made a deal with Nikki (Melody Thomas Scott) for them both to put on a romantic show to accomplish that task. Although their agreement worked quite well for Nikki — who got Victor (Eric Braeden) jealous – it hasn’t kept Hilary away from Neil.

However, on Tuesday, Neil may find himself really close to the result he wanted. Hilary informs him that she cannot bring herself to sign Devon’s divorce papers.

Neil then verifies whether that means she’s looking to work things out with Devon.

“Does that mean you’re ready to give Devon a chance?”

Also, Colin (Tristan Rogers) returns to confront Jill (Jess Walton) about her distrust of him.

“Are you ever gonna trust me?”

In front of Michael (Christian Jules LeBlanc), Lauren (Tracey E. Bergman), and Neil, Jill gets very blunt with him.

“You’ve given me a million reasons not to.”