The situation in Genoa City gets quite intense when The Young and the Restless returns next week with all-new episode as the murder of a familiar face is set to take front-and-center.

Read on for murder speculation on next week’s Y&R episodes and be sure to check back for after-show recaps.

Sage & Patty Have a Common Enemy in Dr. Anderson 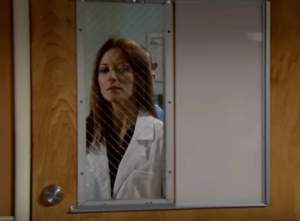 Y&R fans learned on Friday that Dr. Anderson has another enemy within the confines of Fairview. (CBS Screenshot)

The situation at Fairview remains quite intense. Sage (Kelly Sullivan) — in a bid to uncover info on Dr. Anderson’s (Elizabeth Bogush) past — got her husband Nick on board to expose her. Sage figured out that Dr. A — for some reason or another – has taken a strong interest in Nick. During the process, Dr. A has continued trying to form a wedge between Sage and Nick. After slapping Nick and freaking out, Sage got herself committed and is now residing inside the walls of Fairview, a place for the mentally ill. Despite Nick’s concern over her safety, Sage — medicated or not — insists that she stay there to dig up more info on Dr. A. Recently, she found a book in Dr. A’s office, titled Living With Paralysis. Little do they know that Dr. A is somebody from Nick’s teenaged past, hellbent on retribution for the Newman Ranch diving incident that lost her a baby and made her infertile.

On Friday, Patty (Stacey Haiduk) returned to pay Paul (Doug Davidson) a visit. However, it turned out that she escaped from Fairview and was ultimately transported back. During the chaos, she continuously mentioned that Dr. A was a liar and couldn’t be trusted. Later on, she eavesdropped on Nick and Sage’s conversation about the twisted doctor, as indicated in a Y&R tweet below. 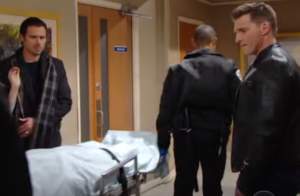 Nick (second from left) and Dylan (far right) look on as Dr. Anderson’s body is wheeled out Fairview. (CBS Screenshot)

Next week, it looks as though Dr. Anderson’s days on Y&R — at least in living form — are numbered, as its her covered body that’s reportedly being shown being wheeled out in the teaser video above, according to Celeb Dirty Laundry.

Meanwhile, newbie detective Dylan (Steve Burton) — who’s trying to solve the murder — expresses that Dr. Anderson’s death is more than a job to him. This is because Patty’s his aunt.

“This is more than a case. This is our family.”

Although no confirmations have been made, Patty seems to be a likely suspect in Dr. Anderson’s death. However, Sage’s recent arrest and current snooping could lead to an investigation on her.