Read on for Y&R’s Tuesday, February 9, 2016 recap. Click here for “Next Page” or scroll to below to view the details surrounding Dr. A’s murder. 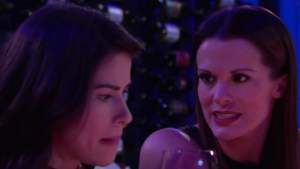 From left to right, Marisa and Chelsea, as Chelsea informs Marisa in Tuesday’s Y&R episode that she’s aware of Noah’s involvement in Billy’s accident. (CBS Screenshot)

Chelsea continues finding out more and more about the shady practices and happenings of the Newmans. After threatening to leave Adam, he latter confessed to her that he’s been working as a double agent to take down Luca and the Santoris. However, just as Chelsea predicted, the plan blew up in his face when Luca responded to Adam’s blackmail with one of his own; if Adam wants to force him out of Newman Enterprises then he’ll go to the cops about Noah’s hit-and-run.

Marisa assisted Noah with covering up his tracks and convinced him not to go to the authorities.

Inside Victor’s office, Adam thanks Chelsea for not telling Billy that Noah hit him. Adam’s glad Billy has a second chance and wants the same with her. Victor arrives and wants Chelsea to leave. She says she doesn’t have to because she knows about the blackmail. Adam tells Victor that he had to tell Chelsea about Luca’s blackmail. Victor says trust in marriage is a wonderful thing, especially when a child’s involved. Adam says he needs to talk to Victor alone about boring stuff. Chelsea is resistant at first but then agrees. When Chelsea leaves, Adam questions Victor as to why he’d bring up baby Christian. Adam tells Victor that he’s sending Noah out of the country on a plane. Adam thinks it loses Luca his leverage so they can grind the Santoris into dust.

Chelsea tells Marisa that the man she loves is in trouble and just walked in. Chelsea tells Noah that she knows about his hit-and-run from Adam. Chelsea thinks the smartest thing he can do is get on that plane out of the country and never look back.

Victor calls Luca a cocky bastard after telling Adam to leave the office. Luca says that “and everyone thought it was impossible to beat Victor Newman.” Victor grabs Luca by his collar and says, “No one beats Victor Newman, Do you understand that?” Noah smirks. Victor says he can end this now. Luca says he won’t touch him because then Noah won’t be safe. Luca says he left two files with his lawyer; one with Noah’s hit-and-run details and the other about Victor’s dealings with Marco (Peter Bergman).

Adam tells Chelsea he doesn’t want to be anywhere but with her; thinking about a life without her is exhausting. She says he’ll never have to imagine that as long as he’s always honest with her.

Marisa thinks she’s the reason Luca came to Genoa City and all this is going down. Noah says he’s the reason. Marisa says he’s honest and brave. She says that there’s one way to pay back Victor; it’s by him being happy with her. She’ll go with him anywhere that he wants to. Marisa says she should’ve never let him go and she loves him. They kiss.

Victor says that Luca’s lit a match and he’ll let him walk out now. Victor calls him a punk and tells him it’s not over.

Noah tells Luca that if they work together, Victor won’t know what hit him. Luca’s reluctant but Noah says “like it or not,” he’s the only one that he can work with who’s on the inside. Noah says Victor’s ways have to stop. He’s gone after the Abbotts and his mother. Luca says they have a deal. Noah warns Luca to be ready because Victor’s going to come at him with everything he’s got. Luca says — in case Noah hasn’t noticed — Adam’s still licking his wounds. Noah says that Summer (Hunter King) is off limits.