Lily Tries to Keep Herself & Cane on the Same Page 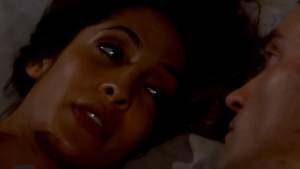 Lily has spent a considerable amount of time trying to convince Cane to give their marriage another chance. Lily had an affair with Joe (Scott Elrod), who later held her against her will. However, when Cane rescued her, her attempts at at reconciliation were shot down by him.

Fortunately for Lily, Cane still has feelings for her, which he made very apparent at Jill (Jess Walton) and Colin’s (Tristan Rogers) anniversary shindig.

On Thursday, Lily — under the covers with Cane — opens up to him about their future. She’s looking to completely regain his trust again. 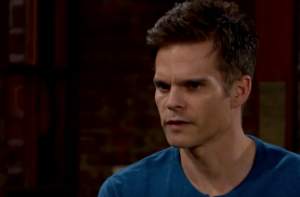 Meanwhile, Kevin — after a long hesitation — ultimately decided to take on Victor as an investor of his cyber project. Victor later got cold feet when he learned about Natalie (Mara McCaffrey) and the program’s inconsistencies. However, he later wanted back in.

Lately, Victor has been away on a business trip, which concerns Kevin, who’s used to the former being aggressively involved.

“Victor fought like hell for this. Why the ‘oh I’m just going to hope on my jet and get back to you when I can’ routine.” 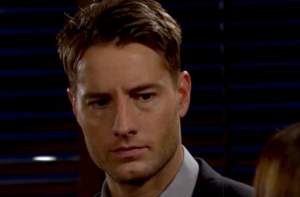 Adam — pictured in Thursday’s Y&R episode — and his plan to take down the Santoris isn’t working out the way he hoped. (CBS Screenshot)

Chelsea has been extremely persistent in trying to remind Adam about his habitual tendencies to be manipulated by Victor. After pressing Adam for info, he finally confessed that he was working with Victor to take down Luca and the Santoris. Chelsea warned Adam that he would be putting himself in danger. However, Adam insisted that he had Luca right where he wanted him. After Luca turned over the incriminating informing on his own father, Adam finally revealed his true motives by blackmailing him. Unfortunately for Adam, the plan blew up in his face. When he tried to blackmail Luca to leave Genoa City, Luca threatened to go to the police about Noah’s (Robert Adamson) hit-and-run if Adam turned over the info he gave him to the FBI.

On Wednesday, Chelsea communicates to her husband that she saw what was coming from Luca.

“Your big plan just blew up. Didn’t it?”

Will Adam sacrifice Victor’s request for Noah’s future, or will he follow through with his plan to rid Newman Enterprises of the Santoris? Stay tuned.