The Young and the Restless returned on Wednesday with an all-new episode as Abby (Melissa Ordway) wanted to know what was going on with Ashley (Eileen Davidson) while Victor (Eric Braeden) gave Natalie (Mara McCaffrey) one week to produce a finished cyber project. Also, Neil (Kristoff St. John) lashed out at Jack (Peter Bergman) for calling him out on his drinking.

Read on for Y&R’s Wednesday, February 10, 2016 recap. Click here or on “Next Page” at the bottom to move ahead to today’s episode outcome.

Abby Wanted to Know What’s Going on With Ashley 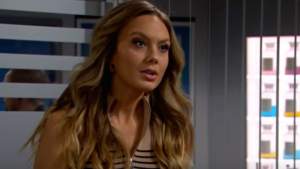 Abby — pictured above in Wednesday’s Y&R episode — wanted to know why her mother’s health seemed off Ashley. (CBS Screenshot)

Ashley has managed to keep everyone in her inner circle — excluding Dr. Neville (Michael E. Knight) about her brain condition. Fortunately, Neville’s unorthodox methods — something she was already investing in — have been working well on her. After weeks of a rumored romance, Y&R fans witnessed Ashley kissing Neville after hearing the great news.

On Wednesday, Dr. Neville says the research numbers are very encouraging. He hopes Ashley has gone over them. She’s distracted. Ashley tells him she’s tired but fine. He wants her to go home to get some rest because of the side affects.

At Jabot Lab, Devon (Bryton James) accidentally bumps into Hilary (Mishael Morgan). She says she hasn’t signed the divorce papers yet and that Neil’s been A-Wall. Neil overhears her saying this and says her job is to be the doctor’s pin cushion and nothing more. Devon and Hilary agree that he was too intense. He suggests that Neil’s still in love with her and that she should tell him there’s no happy ending. Hilary says that she’s still holding out hope for Devon. Later, Neil screams at Hilary. Devon says they should have this conversation tomorrow. Neil says to hell with them and tomorrow. Later,Devon tells Hilary that he’d hate to fire Neil but he may be in over his head in this.

Dr. Neville warns Ashley that the effects of the treatment will get worse before she gets better. She says she’s sick of being sick. Ashley says his miracle cure is crap and he’s full of crap. She quickly apologizes but he insists it’s alright. They hug.

Dr. Neville admits he’s just as scared about Ashley’s outcome as she is. She says that doesn’t make her feel any better. He says she’s his patient and his boss, so if she croaks he’s in trouble. Ashley laughs and says he’s truly something.

Abby (Melissa Ordway) — who’s now working at Jabot — wants to know what’s wrong with Ashley; she says that she looks a little pale.

Ashley changes the subject, saying that they got work to do. Abby tells Dr. Neville that she’d like to know what’s going on. Abby continues pressing Ashley to admit she’s sick. Abby wants her to prove it by taking tests at the hospital.

Max (Jared Breeze) asks Stitch (Sean Carrington) if he wishes he were gone. Stitch says he hates how it happened but he wants the three of them to get settled as a family. Summer shows up to babysit Max. Stitch tells Abby that he needs to see her; it’s an emergency. Summer shows and bonds with Max. She tells him that she didn’t know where she belonged either but felt lucky to have a lot of people — blood-related or not — that care about her. Later, Summer comes back with her coat and Max is missing.

Meanwhile, Abby knocks on a hotel door and is confused at why Stitch isn’t answering. She lets herself in and notices that the room is set up romantically with candles. They then make love on the bed. Later, Abby says she needs to check on her mother. He says not this second and resumes kissing her. Max walks in on them making getting hot and heavy. He apologizes to her. Stitch then turns to Max and tells him that showing up there was out of line; he has no business being there and he knows is.

Will Abby find out about Ashley’s brain ailment, or will she be too focused on making her family situation with Max and Stitch work?