Netflix’s Daredevil is returning and it’s looking like it could be even better than its introduction season. On March 18, 2016, fans will return to Matt Murdoch’s crime-infested hometown of Hell’s Kitchen. Previously, we got an inside look into a new character making his debut on the 2nd season – Frank Castle aka “The Punisher.” Plus several motion teaser posters for characters such as Karen Page and and Foggy Nelson have been released to build up more hype for the show’s eventual return. A new trailer has hit the web and it shows off another popular Marvel hero (better yet, heroine).

Another trailer has dropped and this time it gives everyone a good look and overview of Daredevil’s old flame – Elektra Natchios. Some of you may remember her showing up in the original Daredevil film from 2003 (she was played by Jennifer Garner). She also appeared in her own movie, which dropped in 2005. Elektra first made an appearance in Daredevil #168. She’s a very proficient assassin who heads into battle with a pair of bladed sai. She’s known to fight alongside Daredevil from time to time. Their rocky relationship will be one of the bigger storyline threads for Daredevil Season 2. 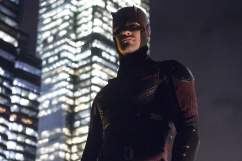 WATCH: ‘Daredevil’ Season 2 Trailer Featuring the Debut of The Punisher