One of the most celebrated superhero shows introduced in recent memory was Daredevil. This dark and gritty Netflix series received nothing but adoration and high marks from comic book fans right on down to viewers of good action/drama.

Now that the 1st season is under wraps, the 2nd season of Daredevil has been filmed and is ready for your binge watching needs once again. Starting on March 18, 2016, Matt Murdock’s alter-ego will return to fend off the evils of his city in 13 new episodes. The latest trailer for this upcoming season has finally been released and it gives fans a thorough look at an incoming character – The Punisher, who will be played by The Walking Dead’s Jon Bernthal. It’s pretty amazing to see how effective Jon looks as one of the toughest anti-heroes ever seen in comics.

The Punisher (named Frank Castle) is out for nothing but pure revenge after his family meets their violent end. Castle turns into a vigilante after his wife and two kids are murdered during a mob shootout in New York City’s Central Park. Driven by their deaths, he dons the famous skull adorned T-Shirt and equips an array of firearms as he looks to take down the mob and anyone else in his way. As The Punisher, Castle is willing to go above and beyond the cleaner methods of most superheroes and opts to kill his foes if need be. As a U.S. military veteran, Castle is experienced in hand-to-hand combat, guerilla warfare, stealth tactics and the use of all types of weaponry.

Check out Netflix’s official description of Daredevil Season 2 below:

Just when Matt thinks he is bringing order back to the city, new forces are rising in Hell’s Kitchen. Now the Man Without Fear must take on a new adversary in Frank Castle and face an old flame – Elektra Natchios. Bigger problems emerge when Frank Castle, a man looking for vengeance, is reborn as The Punisher, a man who takes justice into his own hands in Matt’s neighborhood. Meanwhile, Matt must balance his duty to his community as a lawyer and his dangerous life as the Devil of Hell’s Kitchen, facing a life-altering choice that forces him to truly understand what it means to be a hero.

Not only will we get to see The Punisher butt heads with Daredevil, we’ll also get to see a certain assassin decked out in red gear pop up – Elektra. You can look forward to seeing her in the 2nd trailer for Daredevil Season 2 on February 25, 2016. 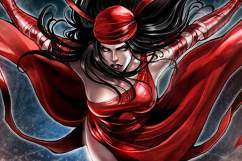