Although there was a significant amount of evidence against him in the “Trial of the Century,” OJ Simpson received a murder acquittal in the deaths of Nicole Brown Simpson and her close friend, Ron Goldman.

With The People vs OJ Simpson: American Crime Story putting the infamous case back on people’s radars, many are again wondering why the blood-soaked glove found at the Brentwood, California crime scene didn’t fit the fallen hero. After all, it was a crucial piece of evidence that led to Simpson getting off.

Furthermore, it’s a controversial topic of discussion from one of the most well-known murder cases in American history that produced — by defense lawyer Johnnie Cochran — the infamous motto:

“If it doesn’t fit, you must acquit.”

Millions watched on June 21, 1995 as Simpson rose from his courtroom table and went to the jury box with the leather gloves. He then — in dramatic fashion — struggled to make the glove fit his hand as he wiggled his fingers.

Simpson then held up his hands to juror and said, “They’re too small.”

Law enforcement said that they located a bloody glove at the crime scene. Hours later, detective Mark Fuhrman said that he found a match alongside Simpson’s home. Ultimately, recordings revealed Fuhrman making discriminatory remarks about African-Americans. This led many to believe that the gloves may have been planted.

Amongst many other examinations of the case, criminal case professionals gathered at Pace University on September 7, 2012 to discuss their theories on it. Alan Dershowitz — a Harvard professor and lawyer — told fellow panel members that having Simpson — as seen in the video above — try on the glove, “gave the case away,” according to Business Insider.

“I’m not asserting O.J. Simpson’s innocence here. Be very clear about that. This has been a horrible event.”

Former Los Angeles deputy district attorney Christopher Darden — who’s known for being the one to ask Simpson to try on the glove — thinks that Simpson’s late lawyer, Cochran, tampered with one of the gloves prior to Simpson’s attempt at wearing it.

“I think Johnnie tore the lining. There were some additional tears in the lining so that OJ’s fingers couldn’t go all the way up into the glove.”

During a separate interview, he stated that there was a change in the glove’s appearance, according to Reuters on September 10, 2012.

“A bailiff told me the defense had it during the lunch hour. It’s been my suspicion for a long time that the lining has been manipulated.”

One theory that the prosecution argued was that the gloves could shrink when they get wet. However, the more popular theory by prosecutors was that Simpson purposely didn’t take his anti-inflammation medicine in order to compromise his glove demonstration. Cochran called them “paranoid” for such claims.

On June 23, 1995, UCLA rheumatologist Dr. Ernest Brahn stated that although the meds Simpson was taking would cause his rheumatoid arthritis to decrease, halting them wouldn’t cause the swelling to subside overnight, according to the Los Angeles Times.

“The kind of joint deformities that we see in rheumatoid arthritis can impact on whether a glove might fit. But many of the drugs that we administer take weeks or months to achieve their anti-inflammatory effect.”

Although there’s no shortage of opinions on the above-mentioned glove conspiracy, several recent and notable ones posted on Twitter can be read below. 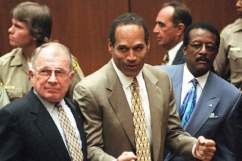 Read More
OJ Simpson
Although the million-dollar question about the infamous bloody glove has yet to be answered. However, we examine some of the arguments behind it.