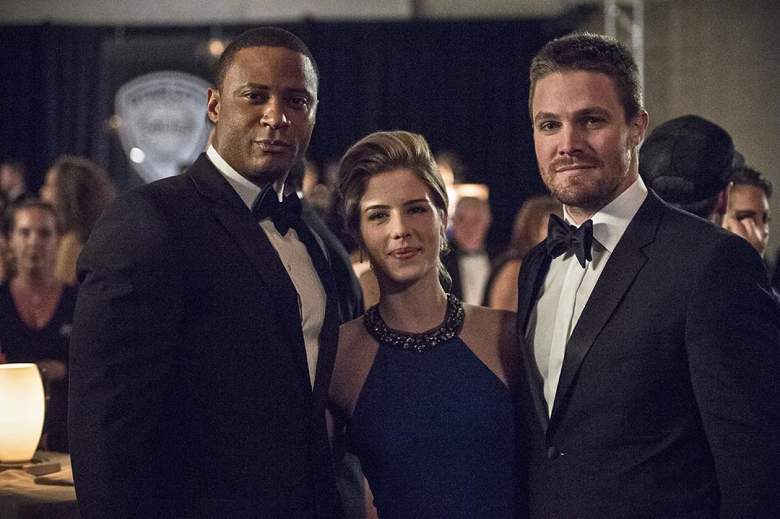 Arrow won’t be back on TV screens for a few weeks, but we’ve got plenty of spoilers. (Instagram)

How are we supposed to wait weeks (weeks!) for a new episode of Arrow when the last one ended like that?

Well, we are sorry to say that the next episode of Arrow, appropriately titled “Broken Hearts,” won’t air until the end of March, but while we wait (almost patiently) for that Wednesday night, we’ve got plenty of spoilers to fill the time.

Before we dive in to what’s next, let’s check out the latest preview for the next episode of The CW superhero hit:

Naturally Oliver (Stephen Amell) is upset after his relationship with Felicity (Emily Bett Rickards) ended when she discovered that he’s been hiding his son’s existence from her. Frankly, we were also pretty upset – is no love sacred?!? – but that’s a totally different story. But, well, the even bigger surprise when it came to Olicity was the fact that Felicity didn’t just leave Oliver, she, literally got up and walked away.

Wait. Wasn’t Felicity going to be paralyzed forever? Apparently not.

I’ve been trying to be as protective as possible over what story we’re going to tell with her being paralyzed, and that’s hard, because that’s not our show. Our show is not really there to tell this story, unfortunately. We don’t really have time. We sort of rushed through it as interesting and creatively as I think we possibly could, but the authenticity of it is that this would be all-encumbering.

So, Felicity isn’t paralyzed anymore, but don’t expect these past few episodes to have no impact on the fan-favorite. Or on Curtis, who helped create the chip to get Felicity to walk. “I feel like it’s really important for Curtis to have made this chip,” Rickards added. “He’s shown what an impact he will have towards the rest of the season, hopefully into next season, with his genius and his value toward what he could do teamed up with Felicity.”

Our shipper hearts may be more than just a little bit broken over the current status of #Olicity, but executive producer Marc Guggenheim has given us a bit of hope as well. He tweeted this late last month:

Not a dream sequence. Not a hallucination. Not an alternate reality. Not a flash forward to a potential future. pic.twitter.com/RfvpKmmjOk

While Oliver and Felicity’s relationship is (obviously) important, there are still plenty of other dramatic storylines to come in the remainder of season four, particularly when it comes to Damien Darhk (Neal McDonough).

Right now we know that the brief partnernship between Darhk and Malcolm (John Barrowman) is over and Genesis is going forward, with only Malcolm in charge. Of course, Genesis is is Darhk and his wife Ruvé Adam’s (Janet Kidder) plan that is, coincidentally, similar to Malcolm’s “Undertaking” from the first season.

Cupid (Amy Gumenick) is heading to the city, a former member of Amanda Waller’s (Cynthia Addai-Robinson) Suicide Squad. You can see Oliver picking up one of her red-tipped arrows in the preview.

And what would an Arrow spoilers post be without some mention of “WHO IS IN THE GRAVE?!?” We’ve got updates and a tease from Rickards. She told Entertainment Weekly:

Could that mean it might be Felicity’s mom – who has seen her role on the show increase throughout the season? Maybe. All we know is that when we finally do figure out who is in the grave, it’s going to hurt like heck.