Who is the next star of The Bachelorette? According to Us Weekly, Caila Quinn is reported to be the new girl.

It would make sense that Quinn would be the new star as often, the next in line is the third place contestant from the prior season of The Bachelor. Last week, Ben Higgins broke up with Quinn and sent her home, leaving her devastated. Over and over, she kept saying that she was ready to get married and find love as she sobbed during her car ride away from Higgins.

When E! News spoke to Quinn about the possibility of her being the new Bachelorette, she said that she was definitely open to the opportunity. Quinn stated:

Because I fell in love before I could see myself falling in love again, so yes, I would consider it. But I definitely need to take a deep breather for myself and kind of take some me time. I’m ready for love. I’m ready for the one and for my best friend and I’m still looking for that.

Reflecting on her sad car ride after her break up with Higgins, Quinn said:

Driving home in the car, I felt an immense, consuming sense of loss because I really did fall hard for Ben. And it was just a really cold water shock that it’s over. I had to deal with it, so it took a lot out of me.

So, why does Us Weekly say that Quinn is definitely the next Bachelorette? An eyewitness told the publication that Quinn was spotted in her hometown of Hudson, Ohio while filming her “intro package” for the show. ABC has yet to confirm this news.

Tonight, Caila Quinn comes face to face with the man who broke her heart on The Bachelor: Women Tell All Special. Cross your fingers for an official announcement of the next Bachelorette.

For more information on Caila Quinn: 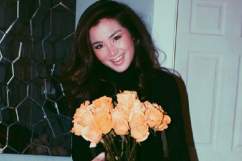 Caila Quinn, ‘The Bachelor’: 5 Fast Facts You Need to Know