Clara McGregor turned heads when she walked the red carpet with her father, Ewan McGregor, for his Miles Ahead movie premiere. Clara — who grew up in Hollywood — stunned in a black silk playsuit with leather boots while her father paid homage to their Scottish roots with red tartan pants, a black t-shirt and blazer.

While Clara’s outing wasn’t anything out of the ordinary, it was her gorgeous looks that got the public’s attention. Furthermore, it’s safe to say that she upstaged her famous father.

Surprisingly enough, the easy-on-the-eyes aspiring photographer isn’t interested in following in McGregor’s acting footsteps. Nonetheless, her newfound admirers are surely itching to find out more about her.

Additional photos of Clara can be viewed here.

In 2014, Clara launched an online photography website with her photos. Her pictures primarily feature male and female nudity as well as self portraits. However, she also has several black-and-white photos of her parents and grandparents.

On August 24, 2014, Clara admitted to Sunday Times that she’s always had an inclination towards photography.

Ever since I was little, I had a camera which I would walk around with. I really enjoyed taking photographs and, as I got older, I felt I could potentially be good at it – and decided to follow through with it.

At around age 14 is when Clara began honing her craft and improving her photography skills, as she told the site.

“I started taking classes in photography four years ago, which is where I learned how everything really works.

Admittedly, Clara — who dreams of working for Vanity Fair or Vogue — told the site that the competitive nature of her industry hasn’t put a damper on her interest. She studies photography at New York University’s Tisch School of the Arts.

“Now I’m going to study photography in New York and I hope to make a career out of it. It’s a tough industry to crack but a very interesting one.”

Clara is also interested in getting into fashion and commercial photography.

Clara — once Los Angeles-based – is the oldest of four daughters. Esther Rose McGregor was born in 2001, Jamyan McGregor in 2001 and Anouk McGregor in 2011. Jamyan was adopted from Mongolia, which is where he worked for Long Way Round in 2004.

On January 15, 2015, McGregor spoke to Evening Standard about the importance of being a good father to his four daughters.

You also have to take your responsibility as a father seriously. You have to make time to get to know your children, spend afternoons shopping with them and just trying to build that closeness with them, instead of just being a parental figure. I’ve tried to make sure that my daughters felt that they were each very special to me, and that I’d always make time for them — I think that’s one of the most important things to do as a dad.

Click here to see photos of McGregor’s family — minus Esther and Clara — vacationing in Cabo San Lucas, Mexico on December 22, 2013.

3. Her Mother Is a French Production Designer

My beautiful mama ❤️ (New work is up on my website – claramcgregorphotography.com)

Clara’s mother — Eva Mavrakis — is a French production designer that her father met on the Kavanagh QC TV series set. The 49-year-old married McGregor in 1995.

During a Graham Norton Show appearance, he stated that something was different about Mavrakis — shown above with McGregor in a 90s photo — compared to the many other women he was involved with.

4. She Has a Strong Bond With Her Father

It’s evident that Clara has a strong bond to her father. Aside from attending red carpet premieres with McGregor, he’s also been a primary subject in her photography portfolio.

In one Tumblr exchange (shown below), Clara expresses her craving for ice cream and chocolate. In response, McGregor tells his daughter to have “an apple” instead. Clara responds with “Pizza is on it’s way” due to “election stress.” He then tells his daughter that she should’ve thought about juicing “some wheat-grass.” 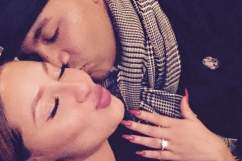 5. She Seems to Be a Foodie

Clara’s has a slew of food photos on her Instagram account, including the one above showcasing food cooked by her mother. Several other pictures with food — bagels, croissants, eggs, salad — can be seen below.

Sunny side up this morning ?