As the boyfriend of one of Hollywood’s hottest actresses — Bella Thorne — Gregg Sulkin is the envy of several adolescents. While his “taken” status is surely one he’s okay with, there’s more to the young English actor than meets the eye.

Sulkin — who’s relationship with Thorne was announced at the 2015 Teen Choice Awards — kicked off his acting career with the 2002 mini-series Doctor Zhivago and had a principal role in the comedy, Sixty Six. From that point on, he had roles in several TV series, including Pretty Little Liars and on Delirium. With a starring role on MTV’s Faking It and his relationship with Thorne, 18, going strong, the sky seems to be the limit for the 23-year-old.

1. He Was Born in London & Made His Bar Mitvah in Jerusalem

Sulkin — who’s Jewish — was born in Westminster, London and attended Highgate High School in North London. However, he made his Bar Mitvah near the Western Wall in Jerusalem. Sulkin is pictured above with Thorne and his parents, who he was seemingly close with growing up.

On September 24, 2014, Sulkin admitted to Digital Spy that while he usually got away with fibbing to the females, his mother always saw right through it.

“I’m sure somewhere along the line, I was at a date rather than my friend’s house. It’s funny – my mum always tells me she knows when I’m lying. I think mums always do. But with girls, they always say they can’t tell if I’m lying or not lying. I feel I’m quite trustworthy… but it keeps them intrigued. I guess!”

2. He Reportedly Once Dated Miley Cyrus

According to Crushable on June 27, 2009, Sulkin reportedly dated singer Miley Cyrus, who was then a star on Disney’s Hannah Montana. At the time, he was starring on As the Bell Rings. Sulkin spoke about how they met and how things were going. The site reported that Cyrus taught him that people on TV are normal like everyone else.

“She chatted me up and we exchanged numbers and emails. She is really, really nice. I never know what’s going to happen. I just go with the flow. But we are close.”

Prior to that — in May 2009 — Star Magazine reported that Cyrus was unfaithful with Sulkin to actor Justin Gaston, her then-boyfriend. A magazine source said that she “thinks Gregg is just awesome. She’s taking it one step at a time but they both would love to make a proper go of it. They are still very young. It’s all quite sweet, really.”

On July 31, 2015, Sulkin and actress Victoria Justice competed on Spike TV’s Lip Sync Battle. Sulkin and Justice, who both debuted on rival networks — Disney and Nickelodeon, respectively — were reportedly good friends, according to MTV.

Round one of the competition — shown above — kicked off with Justice — who crawled on stage — performing “Total Eclipse of the Heart” by Bonnie Tyler, which seemingly pleased the crowd. Sulkin — who removed his sweater to crowd’s delight — came up next with “I Believe in a Thing Called Love” by The Darkness.

In the second round (shown below), Justice got a little wild when performing Nelly‘s “Hot in Herre.” However, Sulkin’s moves and wig stole the show and ultimately the competition with Kelis‘s “Milkshake.” 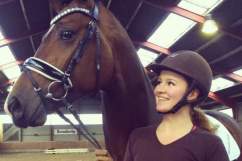 https://www.instagram.com/p/BByhkxvOLTz/?taken-by=greggsulkin&hl=en
you
According to Celebrity Net Worth, Sulkin has an estimated net worth of $1 million. Celebrity Glory — as of April 12, 2015 — estimated that he made a yearly income of $117,647 and $26,144 from sponsorships and endorsements.

The site reported the following yearly salary breakdowns for Sulkin:

5. He’s a Big Fan of the Arsenal Soccer Club

Oh how badly I wanted to be a footballer…. ⚽️ #football #TheJewishRonaldo

Growing up in the UK, Sulkin — pictured above playing soccer — was accustomed to it at an early age. As a teen, Sulkin — until he injured his leg — played for the Queens Park Rangers and West Ham United‘s youth teams. He told Jewish News on October 1, 2014 that it helped set him up for success as an actor. He also confessed that he’s a fan of the Premiere League‘s Arsenal F.C.

“I watch a lot of Arsenal games! I miss home and my family a lot, but I literally can’t live without the football! Be really thick skinned. For every success story there’s realistically about 100 failures. You have to bounce back even stronger and prove to people you can do it. But don’t get too caught up in everything. You also have to live your life and let things go. Experience life – hopefully you’ll come back a stronger actor.”