Tonight is the Women Tell All special for season 20 of The Bachelor, which means that next week is the big finale. Last week, Ben Higgins told two women that he was in love with them and he spent the night with each of them in the “fantasy suite.” We’re just going to assume that Higgins had sex with each of them since nothing seals the deal like dropping the “l-word.” Even so, Higgins has been one of the most genuine and caring Bachelor stars in the series, with the audience eating up his sweet charm.

WARNING: IF YOU DO NOT WANT TO KNOW WHO THE REPORTED WINNER IS THIS SEASON, STOP READING NOW.

The two remaining cast members are Joelle “JoJo” Fletcher and Lauren Bushnell, but Bushnell is the contestant who Reality Steve has reported as the winner. The finale takes place in Jamaica and Ben Higgins struggles with who he should pick as his fiancee. Higgins has a talk with his parents and reveals to them that each girl is “too good to walk away from.”

When Higgins sends home the cast-off, who is reported to be Fletcher, he cries that it “doesn’t feel right,” that she doesn’t deserve it, that he doesn’t want to say goodbye to her and that he still wants to have her in his life because he loves her so much.

Bushnell does tell the cameras that she worries Higgins is also in love with Fletcher. Apparently, her assumptions were correct. Fortunately, Higgins said that after filming, he was honest with the winner, telling her that he had fallen in love with both remaining women. 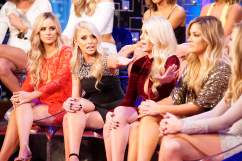 ‘The Bachelor: Women Tell All’ 2016 Spoilers