Check out all the highlights of the best moments that transpired during the 14th episode airing of The Walking Dead’s Season 6 run. Be sure to head to the next page to get every detail on everything that occurred.

1. Morgan Looks to be in the Middle of Constructing a Prison for Future Prisoners

A hazy visual of a garage door opening hits the screen. One of the women overseeing the kitchen can be seen stocking some canned goods. Father Gabriel is spotted taking a stroll, Eugene and Sasha keep watch over Alexandria’s front gate, Morgan can be seen training and Carol is clutching onto her holy beads. Rick finds Morgan building up a prison cell of some sort. Rick asks him why he’s doing what he’s doing and Morgan alludes to having a place where their prisoners can have a place to stay. The scene fades into the starting of this all once again, but this time Carol can be seen being affectionate with her new lover. Rosita prepares herself and leaves a room that she’s apparently been sharing with Spencer.

Elsewhere, Daryl tends to his bike. Carol greets him and strikes up a conversation while they both share a cigarette. Carol asks him about the people that took him hostage and Daryl says he should have killed them when he had the chance. Daryl questions Carol about what her kidnappers did to her. Carol tells him nothing was done to her or Maggie. The scene fades out and gets hazy once again. The same scenes from the beginning return, but no one can be seen walking through Alexandria this time. Carol is once again seen holding onto her cross.

2. Daryl, Denise and Rosita Decide to Make a Trip for Some Important Goods

Eugene and Abraham walk outside of the front gate while Denise and Aaron watch over them. A Walker still seems to be struggling as its stuck nearby a pole within a car. Rosita has a quick chat about having a quick dinner date with Spencer. Once their awkward conversation comes to a close, her and Daryl speak about making a future run outside Alexandria’s gates. Denise ends up making that run alongside them in order to procure the items she needs.

While inside a truck, Denise tries to let Daryl know that she’s much better off driving the truck since she’s good with stick shift vehicles. Daryl keeps on driving anyway. They come upon a tree in the middle of the road, which then forces Rosita and Daryl to clear it out and kill the Walkers nearby. Denise watches them for a while and then exits the vehicle once the path is clear. Daryl decides to take a different path to their destination. Denise chooses to follow him, while Rosita take an alternate path.

3. Abraham and Eugene Get Into a Tense Argument That Ends With Abraham Parting Ways With Eugene

Abraham and Eugene have a friendly conversation as they walk down an alleyway. A rainstorm is in effect the whole while. Both men keep their guard up and hold their assault rifles on deck for any threats that come their way. Eugene tries to convince Abraham that he’s a changed man, but Abraham doesn’t seem to believe he’s adapted to the ways of the world. Elsewhere, Daryl, Denise and Rosita finally meet back up. Denise questions Rosita about her knowledge of survival as they come upon their next destination. When they arrive at a small building, Daryl gives them a game plan on what to do next.

When Abraham and Eugene get to their destination, Eugene makes his intentions clear – he wants to use the place they’ve found in order to produce bullets. Suddenly, a Walker comes out of one of the back rooms. Eugene wants to prove himself by putting the Walker down, but he has a hard time killing it. Abraham allows him to struggle with it for just a few moments before he steps in and takes it down himself. Eugene is angered by Abraham’s act and he gets into an argument with him about what just took place. Eugene tells Abraham that his services are no longer required. Abraham walks off and leaves Eugene to himself. 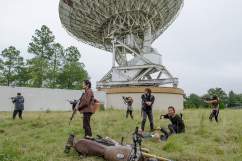 Pages: 1 2
Read More
AMC, Entertainment, The Walking Dead, Walking Dead
The people of Alexandria make another supply run, but danger is right around the corner for them all once again.