Check out all the highlights of the best moments that transpired during the 15th episode airing of The Walking Dead’s Season 6 run. Be sure to head to the next page to get every detail on everything that occurred.

1. The 1st Images Show a Violent Scene That Seems to Have Reached its Conclusion

A car window with a bullet hole lodged into its front window can be seen. A few voices can be overheard in the distance, plus some images of dripping blood can also be seen. A gunshot goes off and then a man can also be heard nearby screaming in pain.

2. Several People Leave Alexandria for a Moment to Either Find a Missing Member or Follow Another One

Carol has just finished writing her letter. She keeps watch while she’s stitching a coat together. She picks up a few supplies, puts them in her bag and gets ready to make her leave. All of a sudden, her new boyfriend calls out to her and causes her to stop packing. She hides her bag underneath a bed and lets him in. He speaks to her about everything he’s been up to since learning about Denise’s death. Carol tunes him out as she seems to be thinking about the terrible things that have happened up until this point. She finally comes back to her senses and kisses him. When nightfall strikes, Carol’s boyfriend is seen sleeping. Carol makes her way out of the room with her bag intact.

Several scenes of everyday life at Alexandria start playing. Glenn and Maggie are taking a shower together, Carl is checking out one of his handguns, Abraham and Sasha are seen having a moment (which Rosita sees and is none too happy about), Daryl gets ready for a journey and the rest of the community tends to their activities. Afterwards, Rick and Michonne are spotted resting in bed. They talk about their schedule for the day, the food they received from Jesus’ people and the threat of an attack from The Saviors. Rick assures Michonne that they’ll end their struggle with Negan’s people if he chooses to come to Alexandria for more bloodshed.

Michonne heads outside to meet up with Glenn and Maggie. While they’re arming their guns, they spot Daryl attempting to leave. Seemingly worried, all three of them (plus Rosita) head out to follow Daryl to wherever he’s driving to. Carol’s boyfriend comes to Rick with her note, which then forces them to head to the front gate to speak with Morgan, Abraham and Sasha. Morgan heads off to go find her, but Rick chooses to go with him for extra help.

3. Carol Runs Into a Group of Men Who’re on Their Way to Alexandria…to do More Harm Than Good

The open road comes up on the screen. Carol is spotted in the car that was once centered in front of Alexandria. Spikes protrude out of it for extra protection against any Walkers. A truck with three men in the back ride by. One of the men uses his assault rifle to shoot out her wheels and causes her to stop near the road. One of then men tells her to come out of the car and demand that she tells them about herself. Carol lies about her name and her place of origin in order to protect herself. The man with the assault rifle knows exactly where she’s from because of how her car looks. He knows all about Alexandria and where Carol is coming from.

Carol tells him that things don’t have to go down so violently. When it looks like Carol’s about to die, she uses a gun hidden in her coat to kill everyone in front of her. The man driving the car is still alive though, which leads to him exiting the car in order to kill Carol. Carol uses one of the spikes stuck within her car to kill that last man. Carol keeps her handgun at the ready and knows there’s one more survivor left. When the last man standing rushes from behind his truck with a knife, a gun shot goes off. The scene ends with us seeing the image that started this episode – dripping blood. 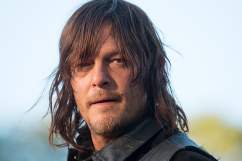