The Young and the Restless returns on Monday with an all-new episode as Victor (Eric Braeden) returns to his Newman Enterprises office to reclaim his chair from his daughter, Victoria (Amelia Heinle). Meanwhile, Jack (Peter Bergman) becomes concerned that Phyllis’s (Gina Tognoni) thirst for making Victor suffer will never disappear.

Read on for Y&R’s Monday, March 7, 2016 spoilers and be sure to check back for after-show recaps.

Victor Is Down But Not Out

Victor is down but surely not out as he returns to hi Newman Enterprises office after being released from jail on bail. (CBS Screenshot)

This week, Y&R loyalist witnessed something they aren’t too accustomed to seeing; Victor Newman hitting bottom. However, while the program’s main antagonist his down, he’s reportedly not out. According to Celeb Dirty Laundry, Victor — who gets out of jail on bail — “will give Victoria the boot and slide right back to where he belongs.” He’ll tell her that he has work to do. Victor needs to prep himself for his court date. The site reported that he may also use his free time “to turn the tables on” some people. 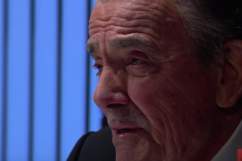 Eric Braeden on ‘Young and the Restless’: 5 Fast Facts You Need to Know

Jack — pictured above in Thursday’s Y&R episode — is concerned that Phyllis will never get over her dislike for Victor. (CBS Screenshot)

Meanwhile, Jack and Phyllis continue bickering over the Marco Annicelli (Peter Bergman) incident that traumatized her. After quite some time, Phyllis finally went to the GCPD — who incarcerated Victor — for his involvement.

On Monday, Jack finds himself worried that Phyllis will never get over her urge to make Victor pay, according to the site. He’ll yell at her and “grab her arm” when she tries leaving. This could lead to the two breaking up. Phyllis has been getting closer to Billy (Jason Thompson), who plans on marrying Victoria again. However, Billy has been the only one that Phyllis has been able to be completely vulnerable with. Could this lead to a future romance between the two?

Also, Stitch (Sean Carrington) reaches out to Michael (Christian Jules LeBlanc) in order to maintain custody of Max (Jared Breeze). Stitch is dealing with child abuse allegations and Michael “could be his only hope” out of them.