The Young and the Restless spoilers indicate that Phyllis’s (Gina Tognoni) hate for Victor (Eric Braeden) — who has fallen from grace — intensifies. Amid her vengeance, Y&R fans may see her losing Jack (Peter Bergman). Due to the circumstances, Phyllis could end up even closer to Billy (Jason Thompson).

Read on for Y&R’s Wednesday, March 2, 2016 spoilers and be sure to check back for after-show recaps. The trailer for Wednesday’s episode can be viewed above.

Victor — as underhanded as he’s been — has always held a spot in his heart for his family. Whenever a Newman was in trouble, the Newman Enterprises boss — pictured above in Wednesday’s episode — would usually be there when it counted. However, Victor’s ruthless ways have finally caught up to him as he’s been arrested for his part in the Marco Annicelli (Jack Bergman) plot. Phyllis — who thought she was with Jack — was unknowingly getting raped by Jack’s doppelganger.

For quite some time, Phyllis’s hate for Victor has stayed at a boiling point. On Tuesday, Red’s revenge plot took an alternate yet more affective route; take away Victor’s freedom. After filling Dylan (Steve Burton) and Paul (Doug Davidson) in on Victor’s crime, the GCPD — after witnessing the evidence Victoria (Amelia Heinle) handed them — placed Victor under arrest. Shortly after, he was admitted to the hospital after seemingly suffering a breakdown. He told his family — who called him out on his problems — to get out of his hospital room. 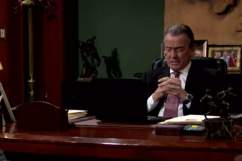 Eric Braeden as Victor Newman: Is He Leaving ‘Young and the Restless’?

Phyllis Could Become Romantic With Billy

Phyllis (L) and Billy (R) may find themselves getting closer than ever in the coming weeks. (CBS Screenshot)

Although Victor isn’t close to biting his pride, he has reached an ultimate low; one that Phyllis will likely take advantage of. Furthermore, focus on Victor’s demise could lead to a breakup with Jack, according to Celeb Dirty Laundry.

Although nothing has been confirmed, Phyllis could find herself hooking up with Billy. After all, he’s the only person that knows her deepest, darkest secrets and revenge plots. The degree of Victoria’s knowledge of Billy’s involvement with Phyllis in destroying Victor would be a factor. If she learns that Billy’s been plotting again her father again, it could mean another end to their relationship.

Will Victor find a loophole to get himself out of legal trouble? Or have we finally seen the legit downfall of Victor Newman, courtesy of Phyllis? Stay tuned.