The screening for Now You See Me 2 was cut short due to a security concern on Thursday at CinemaCon in Las Vegas. The theater was evacuated 10 minutes into the screening and attendees were asked to exit the theater at Caesars Las Vegas, according to Deadline.

The film is the sequel to the successful 2013 movie, Now You See Me, about four talented illusionists who pull off a massive bank heist. The new movie welcomes back Jesse Eisenberg, Mark Ruffalo, Dave Franco, Woody Harrelson, Morgan Freeman and Michael Caine. Also joining that cast are Lizzy Caplan and Daniel Radcliffe.

1. The Screen Went Black 10 Minutes Into the Movie 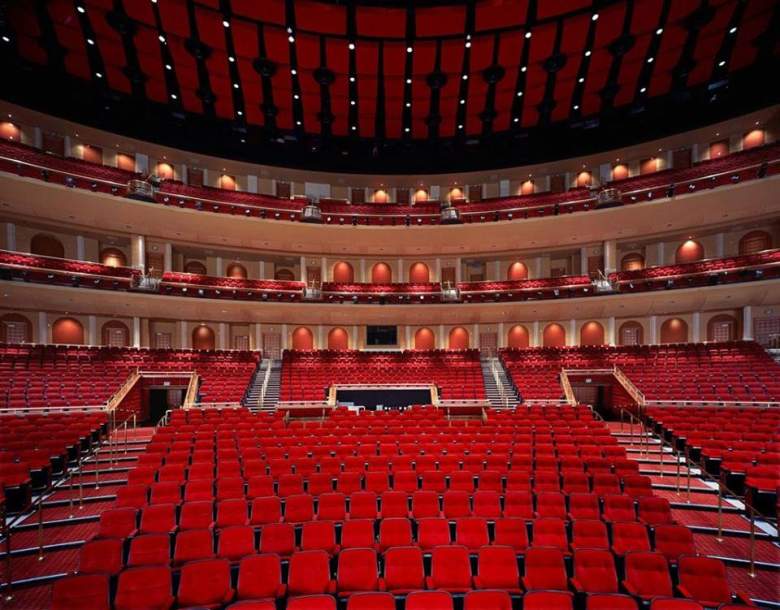 The Colosseum at Caesars Palace had to be evacuated during the screening of Now You See Me 2. (Facebook/Caesars Palace)

The screening of Now You See Me 2 was cut short around 3 p.m. when 10 minutes into the film, the screen went black. The audience inside the Colosseum Theater at Caesars Palace in Las Vegas were told over the PA that it was a “technical problem” and were asked to “please leave in an orderly fashion,” according to Deadline.

Some inside the theater had a sneaking suspicious the evacuation was due to more than technical difficulties. Many film critics and reporters on scene were tweeting about the situation.

We were 10 minutes into watching Now You See Me 2 and the movie shuts down and they ask us all to leave for 'technical issues'. Hmmmm.

Screening of NOW YOU SEE ME 2 was just stopped 10 or 15 min into the screening. They say technical reasons. I say it's something else.

Well that was a magic trick. 15 min into Now You See Me 2, the movie stopped and we were all asked to leave the theater. Weird.

Now being called "a security issue" conference attendees watching "Now You See Me 2" with stars there sent out. pic.twitter.com/PV60DHdB4H

The evacuation was due to a “suspicious item” found in the theater, Las Vegas Metropolitan Police PIO Jesse Roybal told Deadline. The discovery of an unattended backpack was the cause for concern, but it was later determined as no threat. John Fifthian, head of the National Association of Theater Owners (NATO), the group behind CinemaCon, released this statement:

The screening was stopped out of complete caution for the safety of the delegates and attendees. A potential threat had to be taken seriously. By the time we determined it was not a threat it was too late to restart the movie.

3. Evacuees Were Held by the Casino’s Slot Machines

Only the Colosseum theater was evacuated. Those inside the theater were exited to the slot machines inside the casino. (Facebook/Caesars Palace)

Attendees were evacuated to the slot machine area of the casino, Deadline reported. A line of black suited security guards then stood, lining the steps to the Colosseum. Those left waiting for further instruction included the co-chairs of Lionsgate Rob Friedman and Patrick Wachsberger.

Although the screening was cancelled, organizers hoped to go ahead with the planned awards presentation scheduled for Thursday night. NATO managing director Mitch Neuhauser told Deadline the awards show would happen and doors to the Colosseum would open at 7 p.m.

Dave Franco and Jesse Eisenberg helped introduce their film before the screening. Ten minutes later, the theater was evacuated. (Facebook/Now You See Me 2)

Dave Franco and Jesse Eisenberg, who star in NYSM2 introduced the film before the screening. Famed magician David Copperfield, who served as an adviser on the film, also performed a trick for the audience. Now You See Me 2 hits theaters on June 10.

Lionsgate, the studio behind NYSM2, planned for the screening to cap off its slate of premieres at CinemaCon, according to Variety. It also presented the Power Rangers reboot, a new Robin Hood flick and the true story Deepwater Horizon as well as the Ryan Gosling/Emma Stone movie musical, La La Land.

5. CinemaCon Is a Global Event Held in Las Vegas Annually Since 2011

CinemaCon is the Official Convention of the National Association of Theater Owners and has been held annually at Las Vegas’ Caesars Palace since 2011. The event attracts attendees from more than 80 countries and features previews and screenings of Hollywood’s most anticipated films for the summer (and beyond), according to the CinemaCon website.

Read More
5 Fast Facts, Breaking News, Movies
The CinemaCon screening for Now You See Me 2 was cut short on Thursday when a "suspicious item" was found in the theaters, causing attendees to evacuate.