Good Morning America gave Star Wars fans the first look at Rogue One: A Star Wars Story on Thursday. The movie is the first in the Star Wars Anthology that will also include the Han Solo origin story and a feature focused on the bounty hunter, Boba Fett.

Rogue One is a stand-alone film set in the Star Wars universe and is set shortly before the events of Star Wars Episode IV: A New Hope. The story centers on a group of Rebel spies who go on a daring mission to steal the plans for the Empire’s new weapon, the Death Star.

Gareth Edwards is directing the movie, which filmed through last fall. Chris Weitz wrote the final screenplay based on the original idea by visual effects supervisor John Knoll from Industrial Light & Magic (ILM). Rogue One producer and Lucasfilm president Kathleen Kennedy announced in August that the film would enter into new territory for the Star Wars universe.

Rogue One takes place before the events of Star Wars: A New Hope and will be a departure from the saga films but have elements that are familiar to the Star Wars universe. It goes into new territory, exploring the galactic struggle from a ground-war perspective while maintaining that essential Star Wars feel that fans have come to know. Gareth is such an innovative director and I’m so excited to be working with him and the extraordinary ensemble cast he’s selected for Rogue One. 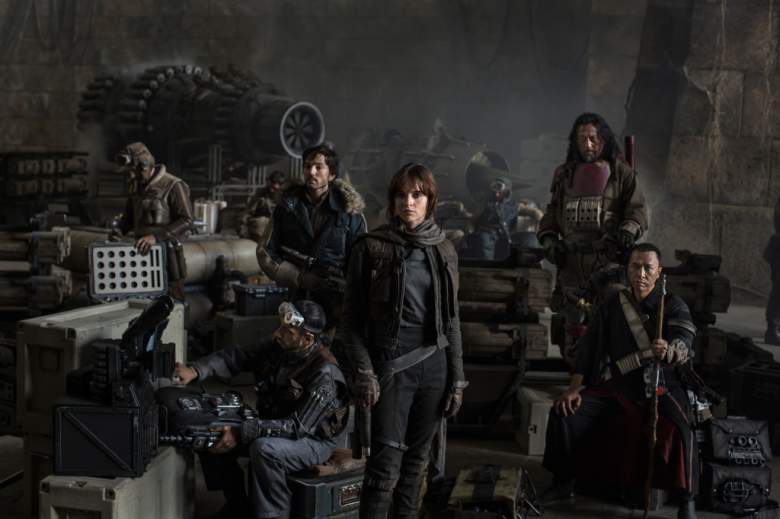 Kennedy also revealed the Rogue One cast at that time, which is led by Felicity Jones. She will co-star alongside Diego Luna, Ben Mendelsohn, Forest Whitaker, Mads Mikkelsen, Donnie Yen, Jiang Wen, Riz Ahmed and Alan Tudyk, who plays a performance-capture character in the film.

The first footage for Rogue One premiered at last year’s Star Wars Celebration. The teaser, which was wholly comprised of CGI effects, revealed an idyllic lush forest planet and a TIE fighter plane flying over trees, but as the camera pulled back it revealed the Death Star in close orbit, according to Variety.

A voiceover from Alec Guinness as Obi Wan-Kenobi in A New Hope played over the video as the Jedi explained, “For over a thousand generations the Jedi Knights were the guardians of peace and justice in the Old Republic. Before the dark times. Before the Empire.” The clip ended with garbled radio messages from distressed pilots until before it all cut out.

Read More
Star Wars
Good Morning America revealed the first teaser trailer for Rogue One: A Star Wars Story on Thursday. The film is the first in the Star Wars Anthology and will premiere in theaters on Dec. 16. Click to watch!