Biggie Smalls’ daughter called out her late father’s best friend, Diddy, for not inviting her to a celebration concert in Brooklyn on May 20 2016. T’yanna Wallace, 22, later apologized on Twitter having said she spoke to the Bad Boy Entertainment founder and that everything was now cool between the pair. In her original messages, the Penn State grad wondered why she didn’t get a ticket to the concert honoring her dad.

She was just 3 years old when Biggie was shot dead in Los Angeles in 1997. His murder is still unsolved.

1. She Said in a Now-Deleted Tweet, ‘Puff Does Nothing for My Family, I’m Tired of Lying’

Me & puff talked, a lot of things were cleared up & everything is LOVE!! ❤️ So everybody can calm down….

In a bunch of now-deleted tweets, Wallace said, “The bad boy concert is for my dad’s bday but I got NOT ONE TICKET. Just wanna point that out.” A subsequent message read, “Haven’t spoken to Puff in years. I guess that’s why I didn’t get a ticket to the concert.” She concluded with “Puff does nothing for my family. Tired of lying for his lame a**!”

During the rant, one troll wrote to Wallace saying, “He don’t owe yall s**t.” To which she responded, “u right he doesn’t. Never said he did. But he lies & says he does. So tell him not to since he don’t owe us anything.”

Diddy and Wallace appeared to settle the beef in another series of tweets, with Diddy saying, “LOVE you babygrl!! See you at the concert!! We’re gonna have great night!!”

@Tyanna810 LOVE you babygrl!! See you at the concert!! We're gonna have a great night!!

The first daughter of hip hop was referencing her father’s 44th birthday party which will be held in the Barclay’s Center on May 20. The show is expected to feature, Diddy, Jay Z, and Mary J. Blige as well as Biggie’s widow, Faith Evans.

The concert comes amid reports that a Biggie hologram may make an appearance.

Wallace was born to Biggie and his high school sweetheart Jan Jackson on August 3, 1993. The couple had split up before her birth. In order to support his daughter and despite his burgeoning rap career, Biggie began drug dealing again. It was only with the pushing of Diddy that Biggie gave up his life on the streets, according to one online biography.

In a 2013 interview, Wallace said about her dad, “The biggest misconception of my dad was he was a big-time drug-dealing gangster. When my mom or my grandma or even my dad’s friends tell me stories about him, I never get that vibe. He seemed like such a funny, outgoing, and caring guy.”

Biggie had another child, a son named CJ, with his widow Faith Evans in October 1996. 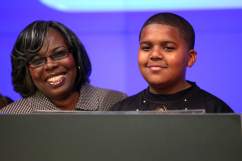 3. Biggie Dreamed That His Daughter Would Complete High School; She Would Go on to Graduate from Penn State

In a 1995 interview with Rolling Stone, Biggie talked about his hope that his daughter wouldn’t take the same path he took. He said:

He also talked about his own dropping out of high school:

It wasn’t like my mother said, ‘You finish school, Christopher, and I will buy you a Benz – you don’t have to sell drugs for that.’ They had said that, I would have been a f**kin’ graduate…Top of the class.

Coincidentally in the remix for Diddy’s “It’s All About the Benjamins,” her father rapped, “F**k the state pen, f**k h**s at Penn State.”

When asked why she chose Penn State, Wallace says, “It was local. I wanted to go to school in New York, but Penn State ended up being the final choice, and I’m happy for that.”

Wallace told New York radio station Hot 97 in 2015 that she worked in the cafeteria while she studied business at Penn State saying, “I work at the school cafeteria. I don’t need a job, but honestly, I’m independent. If I want extra pocket money I don’t feel like I should have to call anyone and be like, ‘Can I transfer…’ No, I’ll just make my own money.”

According to a 2014 interview, Wallace launched her own clothing line in 2013 saying:

I can’t believe how far I’ve gotten with it. I’m very proud and excited for it to continue to grow. Can’t wait for everybody to see the new stuff I release at the end of February.

She also talked about how she got started saying:

I always wanted to be involved in fashion. I had been designing clothes and accessories since high school, so once I got to college, I made the final decision to seriously start a clothing line. It’s heavily influenced by my dad, his music, and his birthplace, New York…I’m hoping with my clothing line, Notoriouss, I can keep [Biggie Smalls’] legacy alive.

The line is named Notoriouss, a clear reference to her father’s official name. Wallace writes on her Twitter bio, “Versace Princess. Owner of Notoriouss Clothing. My Dad is famous, not me :).”

5. She Believes Her Father’s Beef With 2Pac Was Over Hyped by the Media

On her father’s birthday in 2015, Wallace took to Twitter answer fan questions about her dad. She was asked, among other things, about her opinion of her father’s beef with 2Pac. Wallace wrote, “I honestly think it was a miscommunication hyped by media.”

I still have a lot of jewelry he got for me. https://t.co/NvmxoK0sq5

Wallace also said that she still has jewelry that her father bought for her while she was baby. She also wrote, “I was a bigger fan when I got older. I noticed his talent more when I understood the music.” Wallace added in a separate tweet, “Some songs I was like, “Is He Serious?”. But I realized he was just creatively telling a story.”