Johnnie Cochran, the lead attorney for OJ Simpson during his murder trial, is one of the main characters of FX’s The People v. O.J. Simpson: American Crime Story.

Tragically, Cochran died on March 29, 2005, of a brain tumor, according to his New York Times obituary. Cochran was 67. He was survived by his wife, Sylvia Dale, and three children.

His funeral was attended by Simpson, along with many other celebrities.

A funeral program is seen during the funeral services for lawyer Johnnie L. Cochran, Jr. at the West Angeles Cathedral on April 6, 2005 in Los Angeles, California. (Getty)

Cochran underwent brain surgery in April 2004, months before his death. A few weeks after the surgery, he told the New York Post he was “feeling pretty good” and was planning an expansion of his personal injury practice. But he developed an inoperable brain tumor shortly after and died in March 2005 at his home in the Los Feliz section of Los Angeles, according to the Los Angeles Times.

“Certainly, Johnnie’s career will be noted as one marked by ‘celebrity’ cases and clientele,” his family said in a statement after his death. “But he and his family were most proud of the work he did on behalf of those in the community.”

Another member of Simpson’s legal team, his friend Robert Kardashian, died in 2003 of cancer. 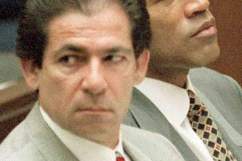 When & How Did Robert Kardashian Die?