Robert Kardashian with OJ Simpson. Kardashian died in 2003 at the age of 59. (Getty)

Robert Kardashian, a close friend of OJ Simpson and a member of his defense team, is one of the key characters in FX’s The People v. O.J. Simpson: American Crime Story.

Kardashian, the ex-husband of Kris Jenner and father of Kourtney, Kim, Khloe and Rob Kardashian, died eight years after Simpson was acquitted of murder. He died on September 30, 2003, at the age of 59, eight weeks after he was diagnosed with esophageal cancer, according to a CNN report from the time.

“It’s shocking when a friend close to you passes. I loved Bobby,” Simpson told CNN at the time of Kardashian’s death. “Bob was there when I needed him most.”

Kardashian had married his fourth wife, Ellen Pierson, just weeks before his death.

His ex-wife, Kris Jenner, spoke about her former husband’s death during a 2014 interview with E!, saying, “It was so surreal, the knowledge he had cancer was one thing, but to think it would actually take his life, I never in a million years thought that would happen to him.”

Simpson’s lead attorney, Johnnie Cochran, also died of cancer. He passed away in March 2005 at the age of 67 of an inoperable brain tumor. 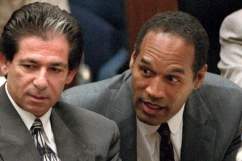 Robert Kardashian & OJ Simpson Falling Out: How Did Their Friendship End?