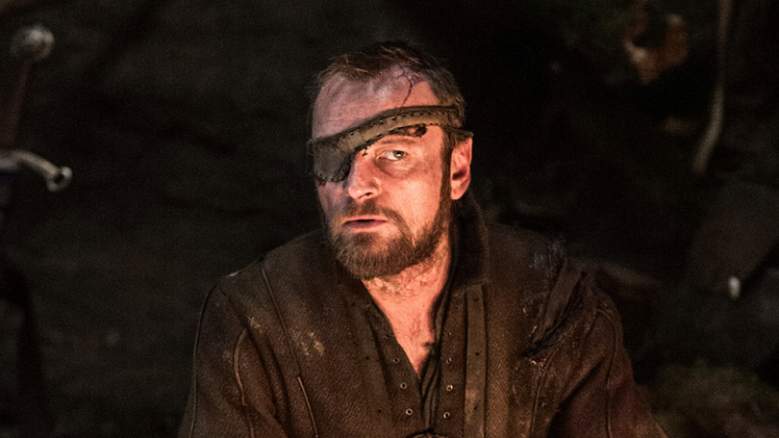 Beric Dondarrion was not only resurrected on Game of Thrones once, but many, many times over. When Melisandre said that she saw a priest resurrect someone, she was talking about Thoros’ resurrecting Beric. Beric can provide some important clues and hints about Jon Snow. But don’t read on unless you’ve already seen Season 2 of Episode 6, “Home.”

Beric Dondarrion Was Resurrected, But He Suffered Some Serious Side Effects

Beric Dondarrion was resurrected by the priest Thoros not just once, but six times. We learned most of this in the episode “Kissed By Fire,” when Beric and Thoros talk to Arya. Beric has died by impaling, an arrow, hanging, and more. But one key element is that his scars don’t heal after he’s brought back. He was stabbed in the eye and he still can’t see. Nothing’s changed.

But there’s one more problem… Beric isn’t completely happy with being brought back. He told Arya that resurrection carries a heavy toll. Every time he comes back, he loses parts of his memory and some of who he was is chipped away with each death. This means that Jon Snow may suffer side effects, too. He won’t be completely the same. There will be some things in his past that he doesn’t remember and some elements of his personality that are gone. It will be interesting to see what those are. (Read more about what might happen to Jon Snow here.)

Thoros of Myr, the priest who brought Beric back to life, is a red priest of the Lord of Light. In other words, he’s in the same specialty as Melisandre. He said that when Beric opened his eyes, he knew that the Lord of Light was the “one true god.”

According to Thoros, the Lord of Life plays the crucial role in bringing someone back from the dead. Thoros didn’t have any special amulets on him that we know of when he resurrected Beric, so Melisandre’s necklace may not have played any role in Jon Snow’s resurrection either. In fact, the whole time that she was praying over Jon, her necklace didn’t light up even once.

Thoros thinks he was just lucky and really wasn’t that special when it came to resurrecting Beric. In fact, before the first resurrection Thoros felt so down and so defeated that he practically gave up on his faith. It appears that losing one’s faith (or almost losing it) is a necessary ingredient to being used to raise someone back to life.